We have a list at the back of the shop of all the names we've all been called, or had written on food, or coffee cups, maybe a burrito, and for some reason one or two will stick.  For me, it's Enore.  Aidan, somehow, is Pete.  Sometimes Aunt Karen will call either of us Enid after a customer who moved away.  He called both of us Enid. Y'know, the sort of name you see in a family tree that makes you wonder, just what was great, great, great Aunt Enid like?  Did she work on a farm?  Was she the town silversmith? I don't know any stories.  So one day, you'll check in with your cousin, let's call her Kara, she's the family historian, more by default than anything cos she got a real job and does cool stuff, like travel to Chile and Norway, and like, Bloomington, but your family is square in the old school, the kind of family who people in the roaring 20s would have thought was from the way old Northeast, all modesty and silence and taking naps and such, anyway your family thinks that cos she's not married it's her job to somehow wrangle all these historical data, but even she doesn't know who Enid is, let alone what she did.  So thanks, Jon, Aidan and I will remember this forever.

So this dude, I never knew whom, called and talked to Patrick.  "Is Enore there? I got a message from Enore.  I couldn't understand it.  He kinda mumbled about like a chaincog or some wheel fluid or like maybe a cranknose.  I don't know.  I've got a bike there and it's broken.  Is Enore around?" Patrick is stumped, however momentarily.  He rolls his eyes.  "No, sir, Enore is not here.  I can help, though, I am familiar with the cranknose."  And so on.  I'm in the lead, by the way, with something like 60 names.  Aidan is a close second, with around 55.  Cos these things matter. 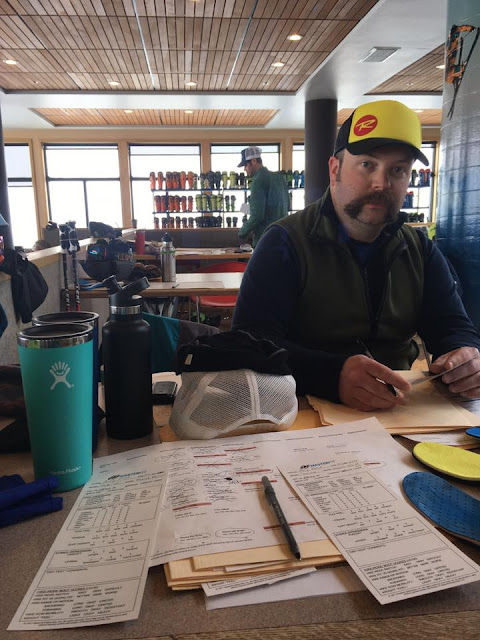 I learned to ski a long time ago and I have been fortunate to ski a whole lot.  I do count days, but the numbers probably aren't interesting.  Skiing is expensive, prohibitively so if one isn't careful, so I've scraped.  Bumped chairs at Crystal and Baker, skied used almost exclusively.  When Aunt Nancy got the second stimulus package through Congress right after Christmas, I broke down and bought the fanciest ski I've ever owned.  I couldn't help myself, though.  I had a Craigslist-score STH 16, the old heel where there ain't no plastic heel track and the binding is just kinda ugly.  It isn't as cool as the 14 din purple 997 Equipe my brother had hiding under his house that he found somewhere around Copper--I'm hoping the dumpster cos that makes us both sound way cooler than we are--but it is heavy and solid and metal and, importanly, free.  When paired with a brand new Stöckli, it just looks old, and I love it.  I have a Kästle MX88, circa 012 or earlier, that I saved from the actual dumpster (rich people) with a decidedly non-indemnified 900S Equipe I got in trade for labour and a newer, lighter S912.  I haven't purchased poles since I was 18, because rich folks forget stuff.  You get it.

In between ski jobs I've mowed pastures, fixed bikes, and sold groceries.  I am not unique in any of this.  I hear and read stories all the time of the bum who scraped by until he was 84 and then just kinda drifted off into some alpine mist in Summit County or Strathcona.  I also hear of folks going crazy, or simply giving up on the dream, and so far I have not.  I have given up on a few dreams, but not skiing.  I have some goals in the back of my mind, the sort that in the face of all the things that have happened over the millennia don't matter.  A trip through the small ski areas of eastern Idaho and the Bear River.  A year or four in New England.  The independent joints in Montana.  All the remaining centre-pole quads of the midwest.  The Keweenaw. Some day.