As the joke goes, I am not superstitious, but I am at least a little stitious.

I can't remember the exact date.  January of '005, good timing if you think about it.  I was managing a bike shop in Tacoma, living in Puyallup, stable and away from the hill for the first time in five years.  I say managing not because that was my job, but cos the actual store manager was flighty.  The sort who'd wait until Tuesday to post the schedule for the week, which started on Sunday, two days prior.  I woke up on my day off, and just couldn't raise the mustard for the long drive to Crystal, even though it was cold in the valley and had recently snowed down to the water.  I rode the Monocog out at Sawyer instead.  The dirt was fast, and the riding good.  Traction for days. Just warm enough that my lungs worked well.  This sounds like I'm starting a narrative for some Dirt Rag Mag stoke piece, I can already tell.

It isn't for Dirt Rag, though.  Maurice and friends gave up the ghost a long time ago.

It started raining the next day, that legendary PNW kind that just slides into Winter's DMs and leaves without so much as a by your leave.  Snowfall had been sparse, and what stayed behind when the Pineapple shifted east was a meager and thinning ghost of an El Niño snowpack.  Crystal stayed open into February, somehow.  I ruined a Vølkl P40 on skiers' right of Green Valley, only got one memorable pow day, and generally bemoaned the state of things.  I skipped First Closing Day, thinking it'd be pea soup milkbird and not worth much, but somehow the storm track slid north and it was a beautiful spring day.  There was even a shot in the paper of Karel Sir in the Valley looking, um, out of time, as he always did.  Probly some purple onesie with futuristic silver shoulder extensions or whatever.  It was annoying just how good of a skier he was.  Anyway, the photo was in the Seattle Times.  Or the P-I.  Or like, the Evening News.  The point is, I still regret that I skipped that day.

At some point that spring, the tap turned back on and the Cascades got at least a solid taste.  Baker finished the year with 464", most of which fell from late March on.  A good year of snowfall here in the desert is 200".  Winter of '99, the Big Year, Baker cleared 300" of snowpack.  It takes lots of snowfall to make any snowpack.  When you get used to snowpacks deeper than many joints' entire winter snowfall, 464" just isn't that much.  Somewhere in there, as well, I sort of realised that I really shouldn't miss chances to ski.  They might just never return.  I don't remember the turning on of a lightbulb, I was simply resolved.  It felt a bit like when I was bumping chairs at the bottom of 6 and asked Sharon the math teacher patroller which boot she put on first and with a slight hesitation, she said "Right.  You?" and with the same slight hesitation, I realised that even though I'd never thought about it until that exact moment, it was always the left.  Always.  It has been twenty-two years since then, and still, I always pull that left boot on first.  If for some reason I start in on the right foot, I get a little confused and have to stop, and then start again with the left. 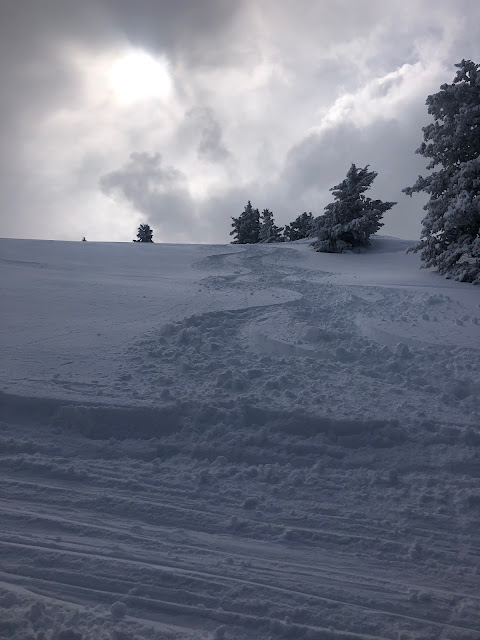 Last winter wasn't a huge one.  We had a great start, with that famous longwave La Niña pattern setting up in our favour.  As near as makes no difference, it was up there with Decembers like '016 and '98.  Just kept coming.  Somewhere around mid-January the meteorological powers that be turned the tap damn near off.  A little late for a typical January drought, but whatever.  It didn't really snow until after we closed in early April.  In that time, I had some phenomenal days chasing chalk in the trees off Three and tryna lay them railroad tracks as deeply as my ability and (currently) 250 pounds would allow.  Or at least as cleanly and consistently as I am able.  I'll admit there were days where the chalk was more like the board than the writing implement.

All the way through, I heard grumbling.  That same grumbling we heard in UT back in '015, or at Mt A in '012, or at Baker in '001.  "It's not snowing enough."  "It's too sunny."  "It's not sunny enough."  "Maybe the snow will be powdery on the 'Backside'."  (My personal favourite.  As though somehow there were an entirely different weather regimen just over the ridgeline.)

While chatting with the In-Laws' friendly, largely intelligent neighbours on a Sunday evening last spring, both spouses agreed with fair zealotry that the past winter had been terrible.  T-e-r-r-i-b-l-e.  I was apoplectic.  Thankfully, this apoplexia often fully shuts off the part of my brain which is responsible for speech.  How is it possible, when all I did was have good fun skiing all winter, for them to completely miss out?  Clearly, there's some cognitive dissonance here.  Skiing is fun, whatever the medium.  So-called "bad" days stand out for me, simply because they are so damn rare.  I do not cherry-pick days, and only rarely skip a trip to the hill.  Very, very rarely.  I don't feel like I have some special insight into enjoying bad conditions.  I simply like skiing.  I constantly find new reasons for doing so.  I truly don't understand what these folks are looking for in life.  The husband of this duo claims certainty that he'll ski until either he dies or physically cannot, and yet, somehow, this winter was T-e-r-r-i-b-l-e?  I am so confused.  He loves skiing so much that at 50 he can claim he'll ski another 40 years, and yet he thinks a slightly drier-than-desired winter is not so much below average as T-e-r-r-i-b-l-e? 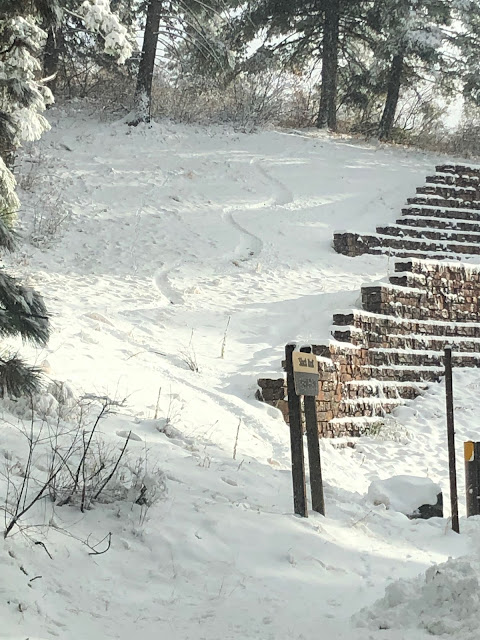 Catherine (she's Crimski in my phone) once told me about her FOMO, which at the time wasn't the hip jargon it is now.  Fear of missing out.  Sounds about right, pop-psychology aside.  First real pow line I ever slayed, to use yet more annoying popular parlance, was due to just such an urge.  Remy had just ducked under the rope at the top of the Cache Run, bout 2.30 in the afternoon, That Winter.  I was 17, skiing pretty decently for an untrained high schooler.  I'd skipped school cos I knew that my repeated Calculus 2 class just didn't need my attention that day, and the snow did.  I got to the hill a little after opening cos I had to pretend for Ma that I'd headed to class, which was a half hour away at Harvard on the Hill, and my first class was at 9.  I couldn't leave early enough to get to the hill on time cos I had to make a show of heading the other way at the correct time.

Remy looked a little peeved at the time, staring down some random High School Joey with a crappy goatee--it was '99, after all--and skinny skis.  I asked if it was worth it, and he just glared.  I took that as tacit affirmation.  I never had the presence of mind to thank him, even though I tuned his skis a handful of times between '007 and '011.  It was worth it, and more.  Twenty turns, good rhythm, 6 or 8 of that mythical day-old consolidated.  One run, 24 years on, and I hope to never forget it.  I could have just kept skiing on past, knowing how hard the bootpack out would be, but I couldn't shake my own nascent FOMO.  Presented with the same options ever since, if safe enough, I have nearly always chosen to say "F(&* it.  You don't know if you don't go."  Ham cramps on Fryingpan be damned.  Ham cramps in a fancy Issaquah sushi joint be damned.  (That one was kind fun, to be honest.  Catherine just said "TURN AROUND LEMME PUNCH YOU" and then smashed my hamstrings with her fists quite aggressively.  It worked.)

I remember the wooziness and the grass in my facemask.  I could barely stand up trying to open the outside door to the locker room.  My arm just felt dead.

It was our weekly 8th grade varsity football challenge for who'd start the following game at a given position, and that week it was just head-to-head shoving.  Whoever was still forward of scrimmage by the whistle won the start.  I was the starting centre, and Aram was second-string.  I drove Aram back about eight or ten yards.  I didn't have time to even congratulate myself.  Aram tripped, and I landed nose-down in the grass, my right fist on his chest protector.  Jay Fox had pushed Nick Tanner about eight yards, and when one of them tripped, they were right next to us.  They landed with Nick's back protector directly on my elbow.  The ER doc told me it was a really nice looking break.  Clean across both radius and ulna, with no dislocation or compound fracturing.  Season over.  I still have the callus on my right middle finger from learning how to hold a pen differently than before.

Long about early November, it started snowing allegro con brio, and Crystal opened around Chris' birthday on the 8th.  I watched from town as Grass Mountain turned snow-pink in the sunset, arm still in a cast.  It didn't matter that I'd successfully challenged Amber for first chair percussion in Concert Band or that in general I skied strongly enough to not worry about my well-protected bones, I couldn't go to the hill.  I held this against football such that I never played again.  The only playing I did at games in High School was on the snare drum.  (And the tambourine that one game.  I will never forgive that.)

Warren Miller says, "Remember:  If you don't do it this year, you'll be one year older when you do."  Sometimes what I hear him say is, "Remember:  If you don't do it this year, these precise conditions will never occur again and this exact experience will be lost, or worse, experienced by some bougie turd who doesn't understand the value of the experience, and you'll hate not only them, who you already do hate, but even a little bit yourself for not having the gumption to wake up and start moving in the right direction."

Maybe I am super stitious. 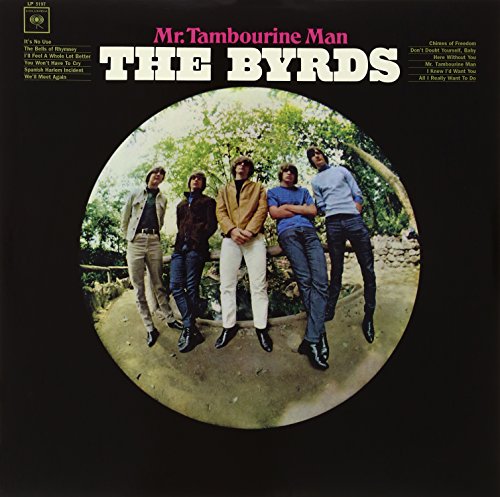