My first day on snow this season was delightful.  I skated to the chair with a spring in my step, felt that little bit of exhilaration as the chair scooped me off my feet, and I giggled as my skis slid along the snow, all the way to the top of Showcase.  I was even more thrilled when I was able to make turns, top to bottom, without pain in my knees!

Even though it was fun, the first few runs felt a little off, technique-wise.  But they always do, the first time back on snow each season.  And now I’m skiing with an old injury, active arthritis, and a higher level of pain.  So, I experimented with different ways to turn my skis in order to not aggravate my knees.  If I don’t bend my right knee too much, it doesn’t hurt too bad.  Meanwhile, my left knee woke up and started barking at me, reminding me that it too has arthritis.  But after a few runs, that knee settled down and worked the way it’s supposed to.  I discovered that if I muscle through my turns, my knee hurts a lot more.  But if I focus on actively releasing the opposing muscles, my body picks up the slack and engages the necessary turning muscles just enough to make the movements, without as much pain.  With some feedback from my colleagues, I was back to symmetrical, dynamic turns by lunchtime. 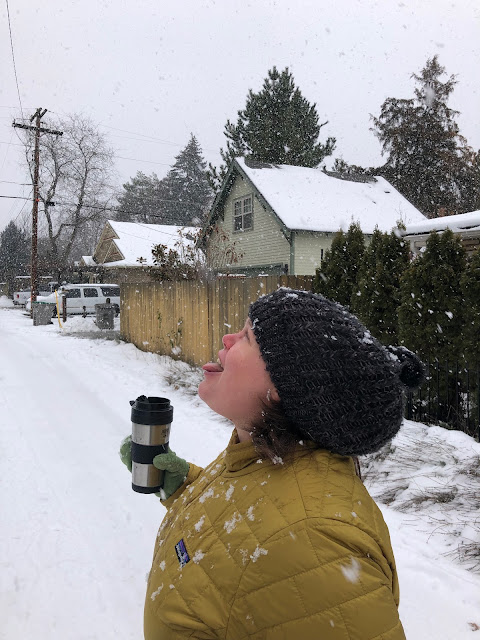 Catching face shots in the neighborhood.

The first hour was almost pain free.  But during the second hour, my bad knee started to ache a little, a few twinges here and there.  Before I went to the mountain that day, my plan was to make a few runs and just see how it went; stop if I hurt too much, ski a few if I felt good, and if I ended up skiing for a few hours, bonus!  So, I thought about going home at lunch time—you know, quit while you’re ahead—but I decided to stay for the afternoon session.  As we started the afternoon, I was pleased that my pain didn’t spike on the first run after lunch.  My pain often reveals itself once my muscles cool down, so taking an hour-long break can sometimes be really uncomfortable.  But my knee didn’t feel any worse than it did right before lunch, so off I went!  Skied awhile more, started to get a little more sore.  But I was skiing with other instructors, so there was lots to focus on besides my knees, and we were standing around talking a lot too, because that’s what we do.

About an hour into the afternoon session, I noticed that I was starting to brace against my outside ski by making my outside leg stiff.  I do this when I start to get fatigued, my knee starts to hurt a lot, or both.  Actually, it is a vicious cycle, because knee pain shuts down quadricep function and lack of quadricep strength causes knee pain—one of the many gems I’ve taken away from physical therapy.  Once I notice myself bracing, I actively work on relaxing those muscles instead, which makes better turns anyway.  At one point during the next few runs, I bent my knee in a way that made me yelp with pain.  I think I skied one more run, but was getting to the point where I couldn’t stop bracing that outside leg, so I called it a day.

Even though my knees were screaming at me on my way to the car, I forced myself not to limp and iced them immediately when I got home.  I was on a high for the rest of the day and the next from the joy I felt because I got to ski.  Plus I got to ski almost a full day without unbearable pain!

The next day, I woke up and my knee was 3 cm larger than my other knee, and it hurt like hell.  I couldn’t walk normally and spent the rest of the week icing, elevating, wearing my compression sleeve, and pouting.  Today, a month out, it’s still not back to where it was before I skied.  For two weeks, stairs were impossible, even going up.  My knees have disliked walking down stairs and hills since I first injured them 20 years ago.  But I’ve always been good at the up.  Even when I’m out of shape, I can hike up a hill like a Gelada baboon.  (As opposed to the clichéd mountain goat.)  But not right now.  By now the swelling has gone down and the pain is less, but stairs are incredibly difficult.  That’s a problem.  It’s one thing if I can’t ski; even though skiing is an important part of my identity, I know that I can have fulfilling life without skiing, even if I don’t know what that looks like right now.  But if I can’t get around because I can’t handle stairs, that’s a real problem.

Here’s a few things I’ve learned lately.  You guys, I have chronic pain!  Maybe that sounds obvious, but in the past, I have not thought of my pain as a chronic condition.  It started when I was 18, got really bad for a few years, then I learned to manage it and did OK for about ten years.  Then it came back and has steadily been getting worse for the last five years.  I don’t know what I thought it was before, but I guess I just always hoped it would get better and go away.  I always thought, if I got stronger, fitter, lost x number of pounds, ate the right food, or found some magic fairy dust and learned to fly, my knees would feel good, even though I also knew that my patellar cartilage was damaged and degenerating.

A recent episode of the podcast Ologies featured an interview with Dr. Rachel Zoffness, a pain psychologist.  (She also has a book that I ordered and haven’t started reading yet but it looks very good.  Link here and at the end of this post.)  The interview made me realize that I am dealing with chronic pain, which requires a unique approach.  She approaches pain with a three-pronged method; bio-psycho-social.  That means that pain is influenced by biological, psychological and social factors.  So, for example, when I first left Utah and was going through a mental breakdown (I believe the medical term is actually “acute stress disorder”), my knee pain came roaring back.  Intense psychological stress increases the pain signals in your brain to “danger, danger, danger!” levels all the time, even if the stress signals are from a separate, physical injury.  Alternatively, when I’m skiing with friends and colleagues, it’s easy to ignore the pain because my brain is in a happy social mode.

Most astonishing, I learned that chronic pain tells you to do three things; isolate, stay home, and don’t move.  This is a survival message in response to the pain.  Which is pretty much what I’ve wanted to do from about 6 weeks post-surgery when my physical therapy started to hit a wall.  She also said that this message our brain tells us about chronic pain is a lie, and that being social, getting out of the house and moving are the best things for chronic pain.  The thing I most appreciated about the interview with Dr. Zoffness is that she told me that the challenges I’ve faced since my big knee injury almost three years ago are, well, normal.  Sucky, but normal.

The last time I went to physical therapy, Rob said he thought it might be time for surgery.  When your physical therapist says it’s probably time for surgery, uff, he’s probably right.  I had an MRI last week, so that may give me some useful information.  (I wanted to do the MRI in October, but then I got COVID, and then it took almost three months to get it pre-approved by insurance.  Grr.)  My knee is a lot better now than it was a few days after I skied.  But I’m scared of the pain and doing anything that might cause weeks of swelling.

It’s hard to end these types of essays.  I want to end on a positive note, because that feels like the appropriate arc when writing about something disappointing.  And truthfully, I am still optimistic about my knee health and the future of my skiing life.  But I don’t have any answers yet, and right now I’m in the shit.  I haven’t skied since that first day back on snow this season.  The pain has reduced to an intermittent sharp pang in my knee cap when I bend it under load, an ache during and/or after activity, and an unsteadiness on stairs.  So, I might try going skiing later this week and really limiting myself to a couple easy runs.  This time, just for a little while and take it real easy.