Grew up somewhere, far away

1) Snowbird, 2) Crystal, 3) Alpental, 4) Bachelor, 5) A Basin, 6) Baker, 7) Solitude, 8) The Place That Shall Not Be Named, 9) Brighton, 10) Loveland, 10) Monarch, 10) Copper, 13) Sun Valley, 14) Alta (too many damn traverses to be any higher), and then a whole lot of other places.  I have not skied in the Sierra, the Tetons, Southeast Idaho, Maine, Montana, New Mexico, or like, Indiana, so my list is woefully inadequate.  The skeenings, though, I couldn't rank them based on any one thing, not even something so important as terrain.

From Silly Season through about Thanksgiving every year, media of various sorts--even as not-skiing as Business Insider--throw up breathy rankings of places one should ski, usually based on metrics like snow quality, terrain quality and variety, views, lifts, food, lodges, lodging, glitz, glamour, perceived cool factor, something called "value," and places to take the square photos.  Often, they use skier surveys of all these important and not-so-important factors and tally up the results in a nice pseudoscientific package and then run short blurbs with flattering photos and super intelligent quotes like, "My 5 year old really likes the colour of the lifties' jackets."

I definitely know that there is more to skiing than just skiing, else I would doggedly fight to live near one of my top 10 rather than here in the desert near a 501(c)3 that may or may not have exactly what I want.  What I don't understand is how the lack of nightlife at places like Alpental or Monarch or Saddleback matters one bit.  The skiing is better, subjectively at least, than Breckenridge or Sun Valley or Palisades.  All three of the former are more expansive, have bigger and more modern lift fleets, likely better food, nicer shitters, maybe paved parking and shuttles directly from airports.  What places like Black Mountain, NH, and Discovery, MT have that fancy joints don't is air to breath and room to believe.

Terrain quality is such a subjective measure.  How a run or a specific line feels and skis is different person to person, storm to storm, year to year.  For a good few people--I'd venture the vast majority of folks who pay for tickets and lodging and foods and plane tickets--the quality of grooming and the mellowness of the pitch matters most, so somewhere like the Skyliner Express at Bachelor is tops.  For many bums, especially the more self-conscious among us, the appearance of radness matters most.  Places with Amphitheaters of Huck, like the Palisades at, um, Palisades, or Corbet's at Corbet's J-Hole, or the Cirque at Snowbird, or that one run under that one chair at Mad River Glen.  I tend to look for those steeps and chutes and such, and even tend to ski better with an audience, but there's just something unmatchable about a deep-day line in the The Void at Mt A.  I've forgot exactly how to get in there; if you know, you know.  I remember rolling along under those huge Abies x shastensis and Tsuga mertensiana.  Spiritual, if you're okay with me getting a little Ashlandy.  If I'm truly honest, I do not recall the exact pitch.  I'd say somewhere between partly to mostly steepish enough.  The gliding, settled turns, the accidental drop off a downed hemlock, just keep turning until you hafta push some snow over the bank to sorta ride down on into the flat landing of the back lot. 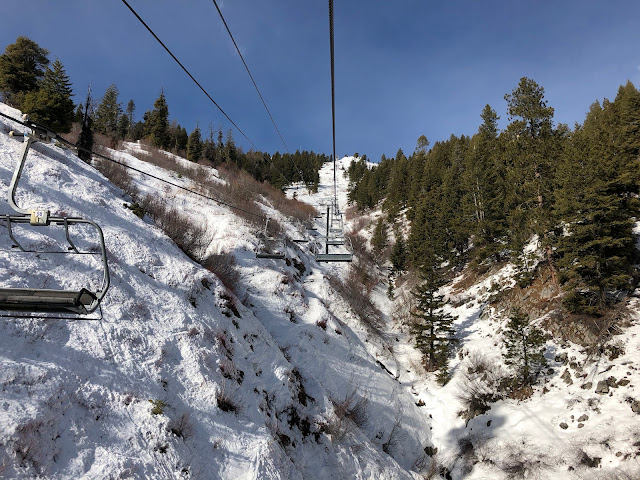 There is no Gaffney's Numerical Assessment of Radness for terrain.  It changes depending on the company, the need to impress or downplay, the conditions, time of day, or one's conditioning.  Shot 8 at Alpental, for instance, might run somewhere well north of 50 degrees up top, but depending on the company, it might just be a nice pow line.  For me, to be clear, it's the steepest $#!@ I have ever skied, at least for longer than a turn or three.  Given the handshakes, fist bumps, bro hugs, and tequila shots (no thanks) I was handed after dropping the knee in full view of the bar at closing, it is above most folks' pay grade.  I was gripped, a little disappointed in how I skied it.  Matt, Hugh, and Catherine all dropped in confidently, made solid turns, slid nothing.  I, um, got down.  Once I was in, and comfortable, I got better, especially once I had passed the pinch and the pitch mellowed a little, to like, 49 degrees, then my knees unlocked and I opened up, back to the strong tele turns I made on all other pitches at that youthful point in my life, but I still want another crack at it.  Wanna do it right.  Whichever gear is on my feet.

Early in the season, most seasons, I am reminded just how subjective my assessment of terrain is.  This morning, on Morningstar at Bogus, I thought "Ooh!! Ima come back here when there's more snow!!"  And then I laughed, cos Morningstar is a groomer, on a beginner chair, short in stature and long on ease of use.  This, this nugget of truth, is what we are all drooling about after three shitty beers we stole borrowed from the cooler at Sean's trailer at about 6.37 pm on closing day.  What Tyler Childers is always on about, or Annie Lennox, or Charlie Parker, or Anton Arensky--the ephemeral, the unknowable, the beatific.  The entire point (such as it is) of the timeless and timelessly overrated On The Road.  We are not meant to know the mystery.

Fog rolls in.  Well, as NOAA says, the stratus deck.  Anyway, the statute of limitations is probly passed here, if there is one.  We're talkin' oh-nine, or oh-ten.  At any rate, I can't see much beyond my skis, but I've studied this line a good bit.  A couple slots uphill of Banana Chute, definitely under the rope.  No one is around, and I'm hoping for good luck.  I don't know if it'll slide, or if Lisa Poncelet or Chet Mowbray (good) or some jackass first year I've never met (bad) will be making some sorta rounds underneath.  If it is someone I know and like, like Ms Poncelet, I am unsure of how to proceed.  I know the position I'd be putting her in.  Better if it's just me and some sluff.  At this remove, 12 or 13 years, I don't remember what skis I'm on.  The illicit nature of my turns gives me a giddy little shiver, I smirk a little with smugness, but really, it's just a nice, steep ramp, and then a really nice apron, and then try not to pancake on the Gap Road. 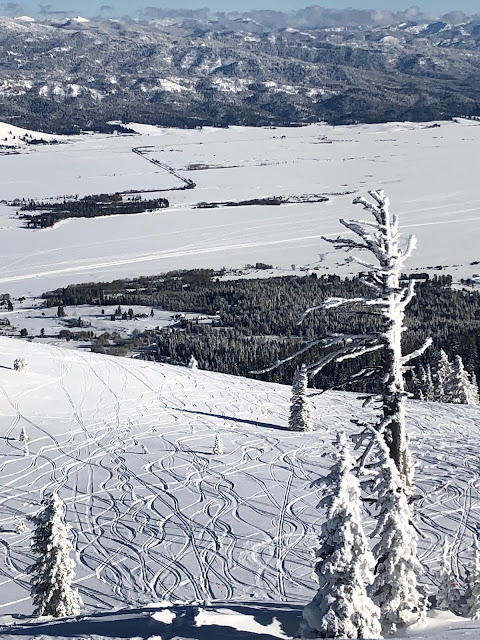 Some terrain gets skied by gnomes.

Kirkwood has some of these lines.  Crystal has some others, too.  Baker, well, you better f*##&$in' know where you're goin'; just cos it ain't closed ain't mean it really goes for us mere mortals.  Some joints (Crystal, Kirkwood) have lines management is too lazy or too inexperienced to control.  Some, like Loveland, have lines that are slide paths directly above major highways, and thus closed for the greater good by faceless folks who in this specific instance really do know better.  Rock Face, Kemper's, The Cirque, et al, they go, they ski with some oomph, don't harm no one din't wanna be harmed.  There's always some excuse, like the Forest Circus or or the Park or whatever, but really, look at J-Hole.  They opened the gates, nothing changed except Doug Coombs stopped being prosecuted for being, well, Doug Frickin Coombs.  Crystal had more than they have, and JK gave it up for a gondola and some fur coats.  Kemper's was the best pow line at Crystal.  I will never forgive, nor will I forget.

The other side of this very valuable coin is a place like Bogus.  Nothing is closed, but then, nothing is the neck-deep, triple-overhead, either.  It's up to the skier to get rad, to find that one turn hidden skiers' right of Hidden Valley, the one that doesn't go but does anyway.  Bohemia, with their "triple blacks".  I'd venture it's just some trees and rocks, à la Pixies or TLC Trees at CM, but, you know, Michigan.  Goods, but marketing jargon instead of full honesty.

It's easy to extoll the virtues of places like Whistler.  Big, open, huge, terrain for days.  One can't hope to ski all that on one vacation.  It just doesn't matter.  I know, deep down and superficially and everywhere else in between, that I am a tin hat repeater who wants everything to be just so, while doing nothing to make it just so.  I am the cynic, that apocryphal man of Oscar Wilde's nightmares who knows the cost of everything and the value of nothing.  I'd venture that one cannot know value without knowing cost, but all those marketing folks and Ashlandy dreamers and God knows who else say otherwise.  Still, Whistler, big, bad Whistler, does not matter.  And yes, I have actually skied there.  The mountains, the terrain, the vert, the vista, it's all there, with bells on.  It still just doesn't matter, in the same what that Bougie Skis Magazine's Annual Top 27.8 Ski Areas To Wear Stretch Pants After 4 PM list doesn't matter.  Terrain is what is under your feet.  It can be Buck Hill, Iceland, Aoraki, Sölden, Blue Hills, MA, or wherever you lay your skis down.  Really, truly, wherever you lay your skis down.  The hype, the marketing, the measurements and pseudoscience, just ignore it.  Pull them skis off the roof, or outa the trunk, whatever, lay em down gently, step in with authority, and ski off.  However you usually do.

Title from James McMurtry's "I'm Not From Here".