Eddie the Eagle the Movie

Michael Edwards competed in the 1988 Calgary Olympics in ski jumping, where he came in last place. He’s a charismatic dude who drew media attention for his enthusiasm and thick glasses, earning the nicknames "Eddie the Eagle" and “Mr. Magoo.” He wasn’t very good, compared to the other athletes, but since no one else in England cared about ski jumping, he got to represent his country. After Eddie competed, the IOC changed the rules, and in classic spoil-sport fashion, made the qualifications stricter for future Olympics. Eddie tried, but failed to qualify for subsequent Olympic competitions, and moved onto a career of product endorsements, reality show dance competitions, and earned a law degree. (1)

Eddie the Eagle, the 2016 biopic about the selfsame athlete, isn’t a movie about an underdog that wins. It’s a movie about an underdog that loses. Make no mistake, qualifying and competing in the Olympics is a huge accomplishment in itself. Eddie was a genuine athlete who put in the work and competed at an international level. He represents all of us who don’t look like the “typical” athlete, but do the thing regardless. Eddie is intrinsically motivated, stoked to sets personal records and didn't let the haters get him down. This is much more powerful message than the false and privileged, “Just try your best, think positive and you’ll achieve your dreams!” Not to say this movie isn’t dripping with privilege—it fails the Bechdel test, features zero non-white people, and all the women are stereotypes (nurturing, cougar, or cheerleader). But skiing itself has a privilege problem; the lack of representation and accessibility to the sport is not unique to this movie. 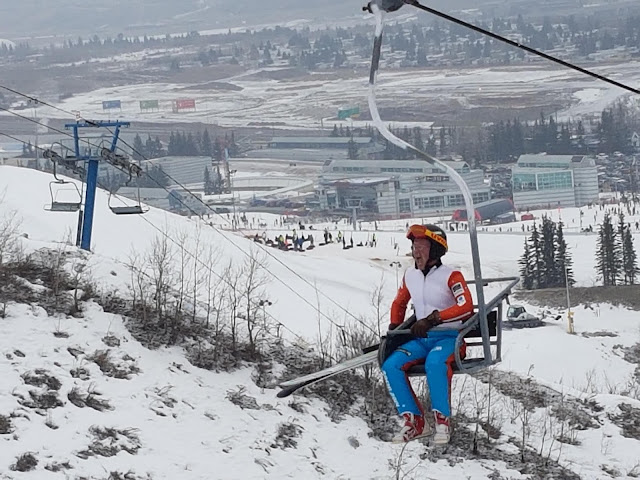 Eddie in Calgary, 2017
(One of two free photos of Eddie I found on the internets.) (2)
As an alpine skier who is scared of leaving the ground, my favorite part of the movie was the sequence at the dry slope ski center, something I’ve only ever seen on YouTube. As he’s learning to ski, Eddie does the classic butt-in-the-air snowplow, in the backseat with ski poles tucked under his arms, tips pointing behind, right at eye-poking height. He gets pretty good pretty quickly and does some sweet synchronized skiing with some other alpine skiers in matching sweat suits, on long skinnies, legs glued together. The later jumping scenes are comically incongruous; close up of Eddie’s face as he’s sliding down the ramp, cut to actual, modern jumping skis (that require special bindings and boots) sliding in the tracks, then cut to Eddie crash-landing on not-quite-vintage-enough green Fischers, wearing those classic red and white, rear-entry Solomon boots. I was actually impressed with Hugh Jackman’s hockey stop. It was controlled and centered enough to make me think me might actually be able to turn a ski. I even learned a few things about ski jumping progression. The 80s ski style was bellisimo, especially Eddie’s historically-accurate pink Uvex goggles. Any skier who has dressed up for closing weekend would be super jealy of the lost and found that Eddie and his coach raid to get him some gear. Oh, and there’s classic Pisten Bully snow-cats.

Eddie the Eagle has all the essential elements of those classic 90s inspirational sports movies I loved as a kid (e.g., The Mighty Ducks, etc.): an awkward underdog; a washed up, old athlete who finds redemption and sobriety through coaching an unskilled athlete; a training montage set to upbeat 80s rock; bar fights; nasty teammates; a disapproving dad who learns to support his son; and scowling Scandinavians. Much like watching Eddie himself, I had low expectations going into this movie, but enjoyed the experience because it was cheesy, in all the right ways.

After watching this movie, I was thrilled to learn that the sequence where Eddie is practicing his tuck on the top of a moving van was based on real events. Apparently, Phil and Steve Mahre did the same atop the family station wagon. At least my dad remembered seeing a picture of it in Skiing magazine back in the day, so it must be true. In the spirit of don’t-try-this-at-home silliness, I share with you this excellent K2 commercial, starring the Mahre brothers and Glen Plake.