Have I lived through the best times?

I had to turn on my Egbert Country mix for this one.  If I drank hard A or chewed, I'd have a dip and a whiskey.  I don't, but I want you to have that image.  Also, it isn't important to know who Egbert is or what sorta country he likes.

I searched far and wide on the flappy internet box and couldn't find any current reviews of my favourite alpine binding, the Salomon 900S Equipe.  It's a 14 din binding with rotary-release, adjustable-wing toe and a cam-release heel piece on a stainless steel track.  It does everything it should, with a little forgivable fidget.  If you don't mind readjusting once or twice a winter, it is what a binding should be, what Hjalmar Hvam might have hoped his invention would become.  This particular binding is in the middle of a long line of similar bindings, all of which are interchangeable with regards to this review, starting somewhere back in the 80s around the time of the 747 when they switched from the dual-wing release toe of the 737 and finishing up around 2015 with the introduction of the STH2 and the downgraded plastic heel track. 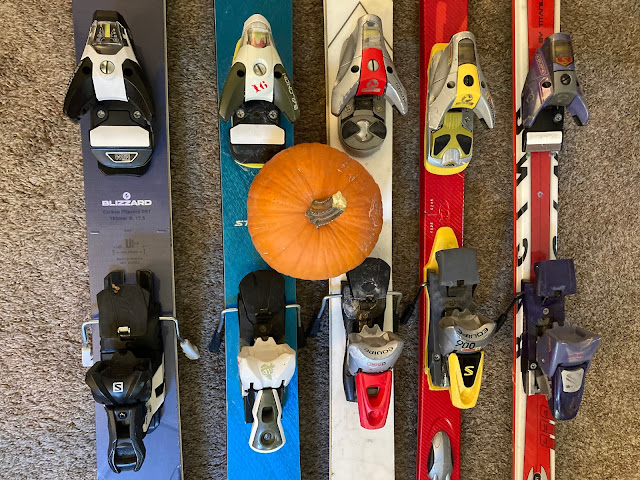 Many bindings today use a healthy dose of plastic, and the 900S is not immune.  It does, however, have that stainless steel heel track that allows for smooth rearward elastic travel.  Some modern bindings technically have more of what Cody Townshend claims is utterly important for carving (while using skis that aren't designed to carve and don't need to cos they're like 109mm or whatever underfoot and have like all the rockers); the downside is that plastic is not especially slick, so you have what feels like a mildly sticky damper on your old Fox 36 TALAS, and instead of smooth extension and rebound at the heel, you get small fits and starts.  Not so the 900S.  One dives into a turn, and the binding disappears.  Extension and rebound are smooth, nicely limited so the centre of the ski remains stiff and ready to recoil out of the turn.

At one point Fischer laid their boots up with a little bit of duck foot.  They called it "Somatec" and it seemed to me simultaneously genius and hokey.  As I age, and as I realise where my feet and joints are not aligned and where that misalignment has caused actual problems like patellar irritation and getting really out of shape and feeling fat.  Well, for sure the actual structural issues.  My fitness is another issue.  At any rate, enter again the Salomon 900S Equipe.  For a long time, I wondered as I tested the release function of customers' bindings why one would seek out or design a binding with independently adjustable toe wings.  Sounds either hokey or unnecessary, yes? Nerdy at the very least.  Being a nerd with janky feet and knees, I'd beg to differ.  Much like the later-arriving Somatec, one can set the bindings such that if you are duckfoot like most of us, or pigeon-toed, you can achieve a slightly more neutral stance.  This does make the ski left- or right-specific, but that's okay.  If one is in something truly high-last like a custom DaleBoot at, say, 112mm, there is, on narrower skis anyway, the possibility of boot-out.  Fear not, for few are called to the widest end of the spectrum; it's a concern I would be remiss in not mentioning.

I have skied multiple versions of this binding over the years, as Salomon hadn't until the Warden MNC built anything truly different from before, opting instead for minimal tweaks for style or fashion, such as adding independent wing adjustment, and removing it by tying the wings to a single adjustment, and adding it back again.  My first was in I think '92, a 12 DIN version that had a cool pattern like granite, a kind of gray-on-gray spackle that some designers used to offset the schreddy neons they were employing in great quantity.  My favourite so far is the 997 Equipe in a purple colourway.  My brother John found it at Copper or Cooper or some other storied Central CO joint on a ski I can't remember.  The heel tested two dins high after I mounted them, and I need about 10mm of gas pedal for even a level boot, let alone the +2 or 3 mm I prefer, but given they were built in that same early 90s timeframe, I'd say that's a win.  At any rate, PURPLE.

Sorry.  Got a little off-radius.  There are literally squirrels in the attic of the breezeway between our house and Tom the Neighbour's.  So noisy.  The 900S, along with its predecessors and successors, is a fairly simple binding.  It has a rotary-release toe and a cam-release heel.  Release-related elastic travel on the toe and heel are middling, not as wild as a Look Forza/Pivot or PX/SPX, but enough.  Look has always touted their elastic travel as some sorta panacea, but with balance and skill, no such panacea is ever needed.  With ass emphatically over teakettle, one would hope to be sans those four giant blades of steel unless there is some sort of balletic good fortune that ends in an upright, two-point landing and with much skiing off into the sunset.  In my many years flogging this binding as THE BEST, better than the acceptable and Instagrammable Pivot, better than the great-at-first, but ultimately toe-twisty FreeFlex, better by far than the Royal Family or any other non-race Marker, I have never stayed in when I wanted out, and never lost a ski that should have stayed with me.  The same cannot be said for all things.

The toe is the obvious touchstone for Salomon bindings, starting with that red and white 747 and continuing still with the STH2.  The heel is the sleeper agent here.  It is easy to step into and out of, much lighter in action than its French cousin over at Look.  Stepping out with your ski doesn't cause any issues with base damage like a Pivot or SPX.  I know, use your pole, whatever; I've spent enough time at joints where the best lines are reached via complex mixes of skating and booting and I long ago found efficiency to outweigh other concerns.  Step on that 900S heel, and, free of concern, you're easily out and onto other things.

Salomon, again, until the new toes and heels, used the same drill pattern from somewhere in the 80s all the way up until the current Warden and STH2.  Like the Tyrolia 92 jig, except that the 92 jig is still relevant, and I wish I liked Tyrolia bindings more just because of that.  A handful of offerings had a five hole heel, like the original STH and the old 997 I love, that also required a slightly different brake, but besides that, roughly 30 years of binding would fit without a second drilling.  This is exciting to me always as a mechanic, but especially now when I need a binding for my 186 Orange Monsters and I just happen to have that '93 997 Equipe in Purple Colourway sitting in wait on an old red P40 that just never spoke to me in '016 like the Orange one did in '000 when I was bumping chairs at Baker and skiing 13 days a week.  Ryan (the Owner) found the Monsters on Craigslist just after Christmas in '018, and they came with an STH 16 I've since moved to newer skis.  Now that my surgery knee is solid, I want to ski the Monsters again, so, PURPLE.

To some, bindings are an afterthought, an annoyance on the way to the slopes.  To me, a good binding is delightfully forgettable, like a nice glass of water or a skilled bassist in rock and roll music.  I have, strangely, had some of my only dramatic arguments with customers over bindings, usually when I'd made it clear that, no, that 1987 Marker M36, despite the word "titanium" on the toe, is not indemnified and also, most certainly is scary and dangerous.  It's a toss-up whether your now yellow Nordica 727 or that M36 will crack first.  Not if, when.  And yet, indignance and disbelief.  (Not dissimilar to some of the current anti-science rhetoric out there.)  The 900S, and its family, will not crack first.  They may need you to snug up the toe wings periodically, and Greenwood's won't mount em for you, and Salomon won't pay your medical bills if they prerelease at speed, but you won't prerelease at speed and some small shops will set them by function test and have you sign a nice waiver and BOOM, you'll be as cool as me with your vintage bindings. 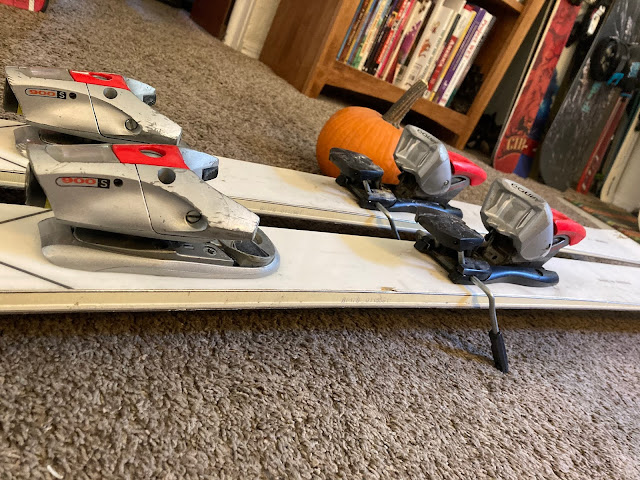 The binding in question.  Pumpkin for scale.

Title from the Desert Rose Band's "In Another Lifetime"