Powdr Corp announces paid fast lanes at select ski resorts, including Copper, Bachelor, Killington, and Snowbird.  (Never mind that Copper has had'em for 20 years.)  They did not announce why they can't spell their own name.

According to the dumpster fire that is the internet, this is Big News.  To me, it just isn't.  Skiing has been a rich person's plaything for three or four generations now, depending on who's counting and how.  At the latest, it started with Sun Valley back when Averill Herriman was like, "Here's this railroad track OH LOOK MOUNTAINS LET'S NOT PUT CHAIRS ON MOUNTAIN HOW BOUT TINY HILL," or something like that.  It could have been earlier in the Alps.  So, if Number 5 of the Big 3 adds a benefit for wealthy, clueless tourists, it really doesn't affect actual skiers all that much, if at all.

There are simple arguments I won't follow, such as bums gonna bum and whatnot.  The general fact, to me, is that all funk in skiing can be surmounted or avoided with a little ingenuity or straight-up oomph.  Rich people cutting in line, or Blaine the Butthole Patroller, is just another piece of bad cheese to be cut from the baby loaf of Tillamook.  Before I push the metaphor too too far, just know that a moldy corner doesn't spoil the entire thing, at least according to both my Ma and Amy's. 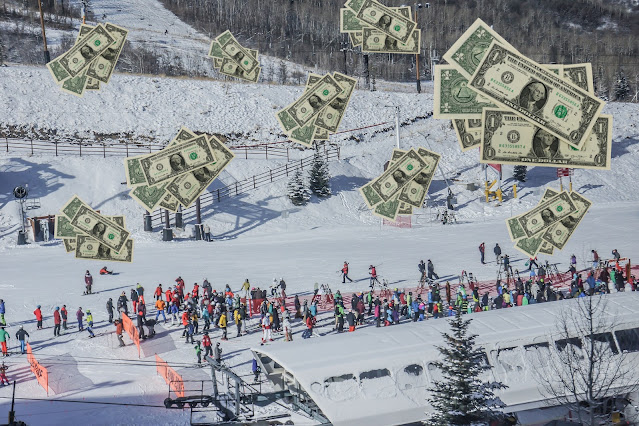 Can you make it rain?  Skip the lift line!
(Not literally, of course.  No amount of money can control the r-word.)

There have been many times in skiing where having an idea of the behaviour of others makes my day better and more productive.  Mt Ashland on the rare deep day, say.  When folks are aiming for the Windsor liftline, I'm already in the trees.  When they mistakenly head to Ariel, I'm still in the trees.  When Ariel doesn't open and they skate back to Windsor and head for the trees, I'm already midway down The Void, really feelin the Abies vibe, headin for the back lot. When Ariel opens, I don't mind that I'm 35th in line, cos they're all headin right down the line, unskilled turns and half-cocked hucks abounding, and I'm sidestepping around NOAA's Golf Ball and heading for Southeast Left.  When (or if) they all figure out Southeast Left, I've already had three runs there, one in SE Right, and am skating back from Rabbit Ears, sweaty, satisfied, and smug.  Like, really dang smug.  Scott Krupa will tell me about some kid he saw who's "really good" and I'll laugh, say I saw him not really knowing how to turn but hucking his meat off everything in sight, have a little argument that Krupa always wins, cos he believes in the Pyrrhic victory, and then remind him that while he and the Huckmeister were fighting for partial turns, I was gettin after first tracks for 5 hours at a 200 acre ski area during Spring Break, and he'll shut up for like, at least 6, 7 seconds.

With some very easy planning, Powdr's underhanded move can be treated with the same sort of smug aloofness.  As some on the dirty internet wires say, one can just avoid these four joints altogether.  To me, though, it seems better to stick it to the man, so to speak.  Avoid them when you can, sure, but if you have reason to ski A Lift for an early March chalk bump cycle, as one should, by all means go for it.  At the moment, anyway, A Lift is a rad old Yan double, slow, out of the way, reliable, and importantly, uncool.  "The only true currency in this bankrupt world is what you share with someone else when you're uncool."  I don't know if Lester Bangs actually said that, but Phillip Seymour Hoffman did when he was Lester Bangs in Almost Famous back in the day.  If he didn't, kudos to whichever writer had courage to be drunken baffoons to write that line.  Okay, sidebar:  y'know how resorty houses on AirBnB always have DVDs of random movies you aren't interested in, and how back in the day their time-share condo precursors had VHS tapes of older random movies?  I feel like Almost Famous should be in all these places.  So many good lines.  Break that uninteresting cycle.  Anyway, back to the task at hand.

I know I am a broken record.  I will forever (hopefully, at least) extol the high virtue of skiing off the beaten path.  What's funny is that sometimes "off the beaten path" is smack dab on the south side of I-90, right on the ID-MT state line.  An incredibly, heavily beaten path, and yet Lookout Pass isn't exactly the sorta joint Ryan (the Owner)'s brother-in-law in Nashville would ever scout out for winter vacation.  Ryan (the Owner) and I were talking about how so much of Ski Country is just empty nothing to people who, to put it mildly, aren't really into exactly just the skiing.  His brother-in-law is pretty specific about skiing happening in places like Colorado, or, like, Colorado.  For those of us looking to dodge the exact sorta thing Powdr is looking to do, this is manna.  As it is for someone in Albany, who could simply sneak up to Titus or over to Catamount.  Here in BoyCee, we have our own right-on-a-very-beaten-path but uncool Bogus Basin, complete with somewhat off-kilter name and legendary access road.  So many of my conversations over the years have been about pilgrimages to Alta or Telluride or Sun Valley and believe me, when timed right, those can be utterly perfect.  Perfect doesn't matter, though. Le meglio è l'inimico del bene, or something to that effect. I want skiing to be somewhat routine, just something I do two, three, four, seven days a week. Mundane, even. "Mundane" sounds like a bad thing to this Insta-addled world, but it isn't.  It's seeing the same faces, making stories for those you don't know, finding the best way to hit the chicane at the bottom of Lower Paradise and then trying to repeat it every so often and failing, learning in the process how to load the ski differently, and learning, however small the task, is everything.

Within stabbing distance of Copper in Central CO are Cooper, and Monarch, and Loveland.  Copper is worth the trip, do not doubt.  The Fremont Glades the week after they officially close, cos you know somebody who knows somebody, the southerly aspects around 4 and 6 on a sunny February chalk day, A-1 in the morning the first bluebird after a cycle, I-Lift when Snowmaking gets enough shaved ice on the grass and Thanksgiving is over and Christmas is soon, there's some stalks of grass and I don't know, it just feels right.  If you are worried about two or three rich pricks who don't ski as well as you, maybe just readjust your focus.  I know, I know, if someone says "just" then just ignore them.  Whatever.  Just move on.  Skiing is skiing, regardless of what Instafart or Bougie Skis Magazine or some other dumpster fire tells you.  If you know, you know, and you'll know.  Cooper is quiet, treed, storied, and most importantly, fun as F#*&$.  Monarch, same same.  Loveland too, though higher and less treed.

A few years ago the trend was penning bleeding-heart odes on "feeder resorts", which is a bit of an oxymoron, cos if it's a feeder for the bigger stakeholders, it likely isn't resorty at all.  It felt like something was missing in all that, that the discussion was more "We need these so Vail and KSL can make money."  About which I do not care.  We need feeder resorts not because they are feeders, but because they provide good, fun skiing on their own, and closer to home for many throughout this messed up country.  Our back-burner, but never back-of-mind Indie 50 dreams are centred around exactly these places.  They are not lesser, or less important, or even different, regardless of what Jon Jay says.  Each year there's a Le Mans start for who can lay down the first white ribbon of death (WROD).  Most years it's A Basin.  Some years it's the currently-hated Killington (soon to pass, cos WORLD CUP WOOOOHOOOO), and rare years it's Loveland or Keystone.  This year, Wolf Creek opened on the 16th of October on a heavy dusting and a beginner chair.  Every so often, it's somewhere most folks have never heard of.  If I am not mistaken, last year it was Wild Mountain, MN.  Having grown up on the Wet Coast, these sorts of opening charges aren't really in my lexicon.  That doesn't lessen the joy and anticipation for the immense bunny hill the Muir Snowfield is after a decent mid October cycle, but, I don't know, I never really caught the turn-fall-off-now bug.  I still cheer when Wild Mountain gets to the car first and peels out, middle finger out the window to all the bigger snow guns.

If the paid fast lanes aren't impetus enough, or even if they are, maybe a little FOMO can help as well.  We all know the underdogs are always cooler.  They always have the right flannels and grills and dirty '84 Brats and neon headbands Bougie Skis Magazine and Jimmy's Fast Times Blog are always "palping" (thanks, Eben) in their "retro fun pose" pictorials.  The only downside is most folks in the Pebble Creek lot Friday morning aren't looking at you, so your ironicalism is really for your enjoyment only.  Oh well. You can always wow them on Instafart.