How to Win the Ski Swap

Tl;dr: buy skis at the swap, not boots.  Look for other stuff too.

1) Make a list beforehand.  Then forget it on the kitchen counter.

2) Arrive at the swap as early as possible.  At some swaps people start lining up super early in the morning the day the swap opens.  I’ve even heard tell of folks camping out the night before, like it was.  But then again, I did show up to a swap once with some friends and we were an hour early, but there was no one in line and it was raining so we went to Starbucks, contemplated going to Hot Topic in the mall (we were all solidly in our 30s), but went back to the swap instead.  I feel like I kinda missed out in that instance, choosing the swap over Hot Topic, even though we had fun.

3) Actually, volunteer or work at the swap if you can.  Swaps are often run by the local race team, ski club, or pro shop, and they often need extra help.  The really good stuff gets snagged before the doors even open by folks who are working.

4) Plan to spend more money than you want, if you want something relatively new.  Last year’s skis for $100 are either a myth or a trap (i.e. broken).  When pricing their gear, most folks ask for more than it is worth, and then pad for the cut that the organizers take. Finding last year’s skis, mildly used, at 75% of retail is a good deal.

5) You might find last year’s gear, unused.  If you are prepared to pay close to retail price, there’s no reason not to buy them.  But you are at the swap for deals, so you’ll probably want to move on. 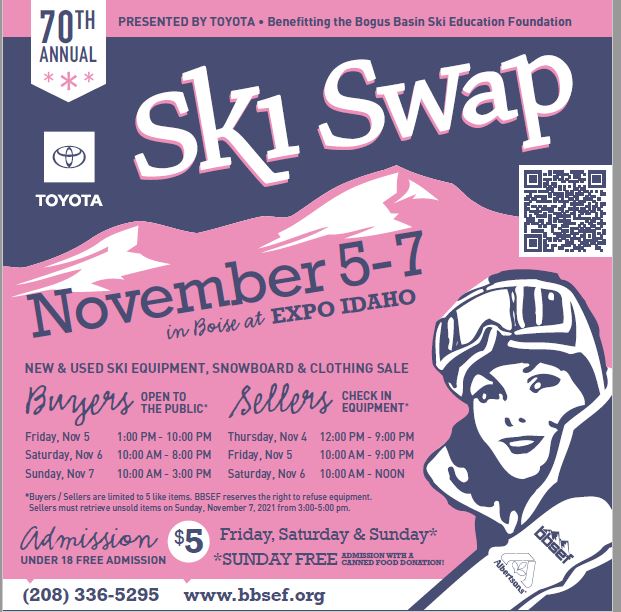 6) Skis will probably be sorted by length, but all the different skis in that length will be jumbled together.  Know your size and go straight to that section.  Now you have to figure out what the skis are.  Google them by brand and ski name (e.g. Nordica Girish); you might find a review or at least some marketing copy that tells you the skis’ intended audience and use, its strengths and weaknesses, age, and hopefully, its original retail price.

7) It may take some guess-and-check on Google image search to figure out how old the gear is.  Skis depreciate in value immediately.  If it’s three to five years old and well cared for, 50% off the retail price is a pretty good deal.  We’re talking $300 to $600.  Caveat emptor, we did some experimenting and found that Google’s reverse image search results are poor to incorrect.

8) Old rental gear can be a good deal for beginners and intermediates.  Try to find stuff that the shops just retired, rather than 10-year-old rentals.

9) All ski companies make good products.  They all make different kinds of skis for different skiers (beginners to expert, on-piste to powder skis), so don’t trust a product just because of the brand name.  I personally dislike certain brands and gravitate towards others, but I’ve sold plenty of skis from the brands that I dislike because they seemed to be the right fit for the customer.

10) Look for breaks in edges (on the parts of the ski that touch the ground), thin bases (you can see different colors or sometimes metal peeking through), bent skis (do the skis match in profile?).  Don’t buy these, as these probably can’t be fixed and might be dangerous to use.

11) Gouges in the base are super visible, so people are often worried about buying a ski with them.  But gouges really aren’t that big of a deal, and can be fixed.  Unless the back half of the base is missing.  That’s different.

12) If people are watching you inspect a ski, make sure you flex it, pout and nod your head.  It tells you nothing about the ski but you look like you know what you’re doing.

13) Get the right gear for your kids and significant other.  Don’t get stuff that kids will “grow into” because they won’t be able to use it until they grow into it.  And don’t buy boots too big with the intention of wearing lots of socks; that doesn’t work and just gives you blisters.

14) Don’t get talked into buying a race ski from a race coach who knows nothing about non-race skis.  (Ahem, I say that because I may have been that guy in the past.)  There will be a broad range of knowledgeable folks working at the swap; they may be brand reps or store employees who know a lot about the products, or they might be somebody’s dad who doesn’t actually know what he’s talking about but likes to talk.  It could also be somebody’s mom who knows all sorta stuff and could get you to the perfect deal.  Which leads me to…

16) Check to see if the bindings work for you.  Your DIN (Deutsches Institut für Normung, currently known as release value, if we’re being legally correct) setting should fall in the middle of the range of the binding.  Swaps should have DIN charts available to help you estimate yours if you don’t know.

17) Check for drill holes where you can.  A ski starts to lose integrity after they’ve been drilled 3 or 4 times, or if the holes are closer than 10mm to each other.  Redrilling a ski once or twice is no big deal.  It’s OK to buy a ski with a binding you’ll need to replace; consider that as part of the cost of the equipment, as well as the cost to get the bindings adjusted and tested (about $25), and/or remounted ($50+).

18) After the swap, bring your skis to a shop to get the bindings adjusted (refitted to your boot) and tested.  Do not try to adjust your bindings yourself (unless you’re a certified binding mechanic who works at a shop, like Enore).  They have the knowledge to set them correctly and the really expensive machine to test them.  It can be the difference between correct and incorrect binding function, which in turn can mean the difference between walking away from a crash and injury.  Also, learn about indemnification, which basically means old bindings can’t be serviced, so they may not be safe.

19) Don’t trust the internet to tell you your ski boot size; boot sizes do not translate directly to US shoe sizes because they’re different units altogether and you need your ski boots to fit differently than your shoes.  When people fit their own boots, they often get it wrong.  Temperature affects a boot’s flex and fit, so what feels comfortable in a showroom will probably be too big (and maybe too stiff) on the snow.  So, do you just buy a boot that’s uncomfortably tight and hope it gets more comfortable?  Also not a great idea because they could just be uncomfortably tight.  Well heck, what do you do?

20) I can’t really give advice on how to find a boot at a ski swap because it’s really hard to do unless you know your size and exactly what you want.  You can read reviews, and get an idea of what you want, but there is no substitute for visiting a good bootfitter, who can usually only be found in a ski shop or their own studio.  They not only assess your size correctly, but also take into account the shape of your foot, heel, ankle and calf, as well as what kind of skier you are, to find a boot that fits your size, shape, and style.  Then, after you buy a boot, they can tweak the fit.

21) If you can find a good bootfitter at a swap, pester them until you’ve found something good, or better yet, just go visit them at the shop where they have access to a good range of boots and the time to give you the attention you deserve.

22) So, should you go see a bootfitter before the swap to figure out what you want?  Well, no, because it’s rude to take someone’s time and not pay for it.  Emily, for example, is literally getting paid for her experience and expertise, both of which are many.  If a bootfitter takes the time to fit you properly and make recommendations, you will not regret buying your boots from them.  They can help you avoid the head and body aches of being in a boot that’s too big, too small, the right size but pokes and pinches, too stiff, too soft, overflexed, underflexed, over- or under-canted or canted the wrong way, among other issues.  In doing so, you won’t have to learn about the annoying challenges any of the aforementioned problems can cause because your boots will fit and they will work for you.

23) That said, it is ok to ask a shop employee if you can step on the Brannock device (aka the boot sizer-thingy) to figure out your size.  Again, remember their time is valuable and don’t be a jerk.

24) Do not buy a used helmet.  You have no idea if someone has crashed in it, or left it in the sun, or how old it really is.  Helmets break down after 3 to 5 years and need to be replaced, and they are only good for one impact.  That’s not just a marketing lie to get you to buy a new helmet; it’s been independently tested by multiple organizations.  It’s not “better than nothing” to wear an old, worn-out helmet.  It’s actually probably worse because it’ll give you a false sense of security and keep you from buying a new one that’ll actually work when you need it.  Always buy your helmet new. You can sometimes find new helmets at the swap (often sold by local shops, in their original packaging).  Buying a year-old helmet is fine, as long as it isn’t used and is in that original packaging; just know you’ll have to replace it one year sooner.  Shelf life isn’t technically as destructive as life in the wild, but the closed-cell foam used in helmets off-gases and degrades no matter what.

1) Price low if you want to sell it.  Below half of retail for anything 3+ years old, assuming it’s in top-notch condition.  Then knock $50 off.  Remember the swap organizers are taking a cut, so add a bit back on.

2) Decide how much you want to sell your stuff for before you get to the swap.  Folks there may give you advice, but there is no standard and everyone’s opinions vary wildly.

3) Learn about indemnification.  Here’s a list of indemnified bindings.  There’s no use arguing because it’s a legal/liability thing. (Enore skis on 24-year-old bindings, but he had access to a nice Speedtronic to test them off the clock.  Few people do.)  Plus, do you really want someone to get hurt on your crappy old stuff?  I’ll answer for you: NO.

4) If you want to get a really good price for your stuff, you’re probably not ready to sell it.  You do get some value walking past it in the garage and reminiscing about the great turns you make on those skis.

5) Regret is a part of life.  Those FreeFlex 14s may have developed the Tyrolia Twist, but the Völkl they were bolted to will still make that one jerk below the Women’s Start mad when you got the line he intended to film for his Instagram Story.  Should’ve kept those Kendos.

6) Forget you sold stuff at the swap, so when your check shows up 4-6 weeks later, it’s a nice bonus!