The upper lodge isn't super crowded most weekdays.  If you forget your PB&J, the line for the fairly decent burger combo is short, and they have seasoning salt for the better-than-mediocre fries.  I'm not really good with names.  I don't know the name of the guy who always looks like he's angry, but in any interaction I've had or watched has just been some dude doing a job, no fuss.  JJ and Beardy Geoff might be absent-mindedly stirring some homemade fry sauce by the window on break from fixing the lights and parking the cars.

There are more cars here than there used to be, for sure.

There are more skiers, too, though whether that matters just yet is hard to tell.  Bogus Basin has never been confused with Big Snow Baker or Mammoth Pineapple Dumps Mountain.  Some of my best deep day turns anywhere have been here, though.  Some of those, in turn, were sneaking in and out of the trees on Saturday night after work with Ryan (the Owner).  The signs all mandate staying on lighted runs, so if the light reaches into those trees, somewhere along the line, you're good, right? Right?! 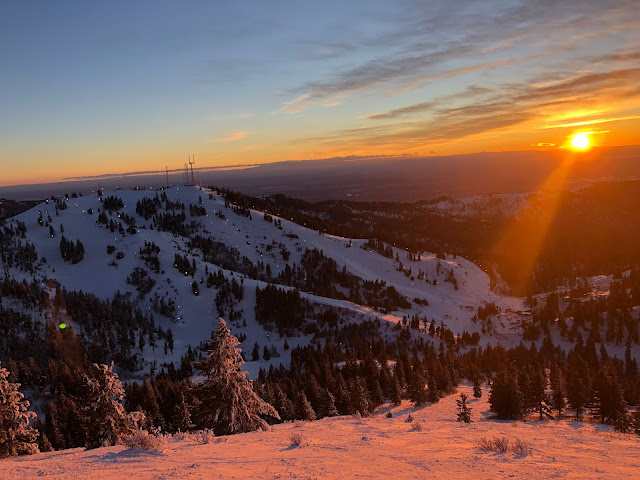 Sunset laps on The Face are best.

Bogus shares 501(c)3 status with such auspicious joints as Bridger and Cooper and Mt Ashland.  Runs and lifts are largely named after mines, well- or poorly-known.  Comeback, Paradise, Superior, Matchless, Bonanza, Lucky Friday, names that could be boring and generalised, but here are specific and part of a story.  The Boise Basin to the northeast, around Idaho City, Placerville, and Centreville, is littered with sluices and rubble, at times ugly in the absence of the old miners.  At one point in the 1860s, Idaho City was the biggest city in the region, the biggest city between St Louis and San Francisco by some estimates.  The actual number of folks was only around 7,000, a small town by today's standards, and today, the estimate is less than 500.  The names, the holes in the ground, the ghosts of dreams and murdered miners all remain, mostly out of sight under the haze that settles so often in winter inversions and among the scattered ponderosa that have managed to re-establish.

This fall Bogus paved the lower lot, something that for some reason caused more momentary excitement than the glading and bushwacking of runs or the announcement of a push for new terrain in Clear Creek.  I am nonplussed.

A handful of years ago, the Board hired Brad Wilson to captain the sometimes creaky ship, and he's done a pretty good job.  It's easy to pass judgment from afar, for sure.  His predecessors weren't imaginative men.  The fella who was at the helm immediately before Wilson was a numbers guy, seemingly blind to the benefits to be had after assessing risk and taking a plunge.  No real summer operations, minimal snowmaking that was largely just used to darn the corners that'd worn thin early in the season.  There are rumours of the GM from the late 80s and early 90s saying "we don't groom"; the lack of which was anathema even then at a place like Bogus where days between good dumps might stretch into months.  Brad might not be singularly responsible for the impressive push into being the more going concern that Bogus is today, but the changes started when he did, and continue.

Something I find heartening at a place like this is it will likely always be burdened with not being Somewhere Else.  I say burdened, because that's how many folks see it.  Saturdays will certainly get worse, at least the mornings, and Sundays, too, and maybe Fridays, too, also, as this town fills up with "knowledge workers" and whatnot.  Boise doesn't have the cachet of McCall, nor Bogus the lower temps of the West Central mountains.  It will likely never have the glitz of Ketchum or the groomers and fancy bathrooms of Sun Valley, thankfully.  The terrain will--without some geological mishap--always be here.  Hopefully, most years the snow will come, or at least the cold for some scratchy man-made.

In the years since Amy and I left Washington, I have found skills I didn't need while still skiing in the Cascades.  Siskiyou patience, willow dodging, planning, acute observation, constant slarve-steer, none of those things was wholly necessary in the big pitches above Silver Creek and the Nooksack and the South Fork.  Aside from thirty years of learning the nuances of the snow level, you pretty much just ski.  All of these little tactical insights come in handy at Bogus, from the patience to wait out the crowds to the slight softening of the tail edges to load up a little Scandi Flick around a Doug fir.  To always be willing to change course mid-run, or mid-turn; that little "OOH!! There it is!!" 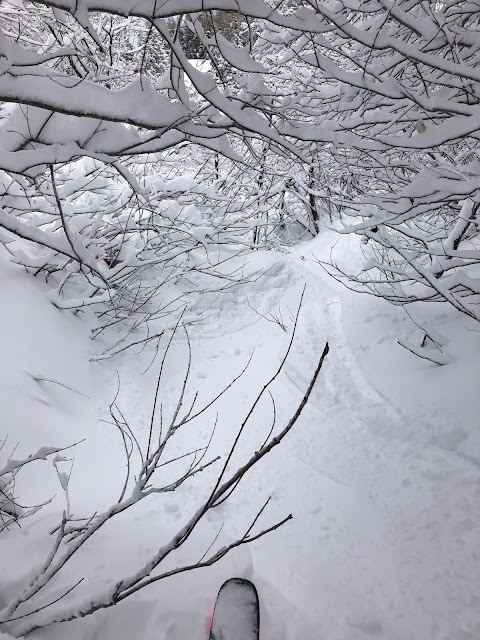 Shafer Butte tops out a little over 7500'.  Chair 6 ends on a protected bench just shy of that point, still windy and prone to some rime.  The best turns hide from view, sometimes even while in plain sight.  The chalk bumps of the upper Triangle, random Doug fir lanes in between the main runs, little ridges when one holds the line a little bit left of the lift line.  A little imagination can get you into the only true steeps at Bogus, down low in the creek and in full view of a mostly disinterested full line on the chair above you.  If your timing is good, say, day 3 of the only three-day cycle to hit each season, you might even find a handful of knee-deep turns left of Lucky Friday or deep into the lower Triangle.

It really does snow here.  I always feel like Bogus is the East Coastiest place in the west, including the requisite head-scratching, wish-you-were-here sorta days.  15 March--at the start of the ongoing pandemic--seemed like any other spring day in town, but there were turns everywhere at the hill, and it felt like a hurricane party or a wake.  I was nursing a pre-surgical knee and didn't get after it, but that afternoon made up for a year of wait-and-see.  Then like it was for everyone else, it was over and we started the garden and tried to cope with the simultaneous fear of death and boredom.

The biggest accumulations here seem to be from an easterly or southeasterly wraparound, those little mesovortices you notice on the radar or Jim Steenburgh's twitter.  Much like the south shoulder of Mt Shasta, the local orography precludes major snowfall with the exception of being in the right place during the right cycle.  Those are the mythical days.  Days where even in town, your tracks are filled in before you pass by again.  Everyone everywhere has a memory of this sorta day, and maybe I'm lucky, but I don't have just one.  I have had enough days where the snow kept falling, the wind calm enough to allow the flakes to hit the ground in relative peace, I don't know, at some point memory fades.  I am also not a fisher, half Norske blood aside, so I tend not to worry too too much about measuring that which need not be measured.  If it sounds like bragging this time, well, heck, then it is.  I have skied snow to my armpits.  (Tele, but still.  You gotta get it to get it.) 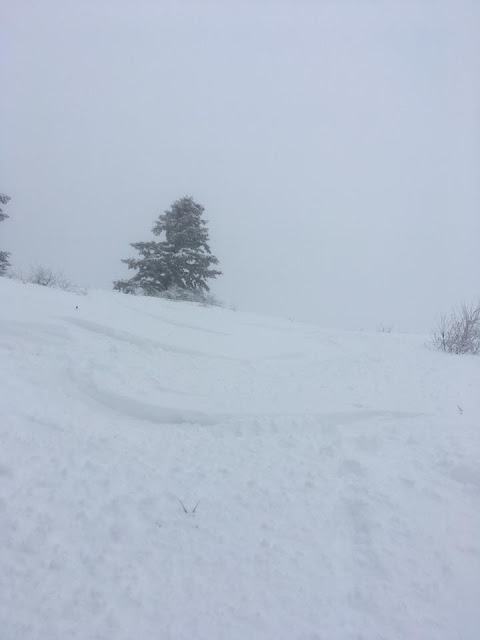 Where the cat-track goes right, we go left.

On the whole, Bogus is like any other joint.  Take your time, make a few wrong turns down a few wrong lines.  See if you can find the turns that aren't on the map.  Have a beer in the lot in April.  Show up early on a Monday and wonder why nobody else did, then grumble a little when you realise the lifts ain't gonna spin until 10.  Then ask some nerdy local with a moustache and he might grumble in turn about how maybe BoyCee has an annoyingly late sunrise because it should be on Pacific time, but is instead on Mountain time.  Some of the lots are van-campable, especially later in the season.  Good sunsets, some scattered Stellar's jays, ground squirrels and chipmunks if they're awake.  Probly a goofy local in an old Plymouth Voyager with a dog or six and a ratty cast-off Gore-tex jacket.

Bogus is not a backward place.  They have affordable tickets, affordable foods, and a surprisingly new lift fleet.  Decent grooming, satisfactory snowfall, some crowds, some quiet.  Allegedly a whitebark pine somewhere along the west side.  I wouldn't mind if somehow it were another grand or so higher, and I wouldn't mind if Ada and Canyon Counties weren't so popular.  Then again, I wouldn't mind if I lived in a cabin in the woods in some undisclosed mountain range you've never heard of.  Heck, somewhere I've never heard of.  For now, I'll take the good with the less good.

Some day, I think a Wednesday, during the off winter of '018, I and Amy were skiing with Raleigh and a friend.  It had finally started snowing, and I finally got a chance to ski the new Rustlers.  Most of the hill was good, not deep, but good.  We kept sneaking into the more challenging lines, which at Bogus is often simply finding where there are fewer turns and more willow whips.  Down low in the Triangle, we lined up a couple runs where the best tactics were to keep your skis to the brush and block like a slalom skier with your poles.  In a season where it snowed little, settled quickly, and almost never happened in the first place, we found boot-top and deeper.  Just the four of us, some willows, a little patience, and a left turn where most folks just kept skating back toward the chair.

Title by Hal Ketchum, from song of the same name.