Copper's new snowstake is funny.  It's labeled "SEND-O-METER" and has some wonderfully overstated names for a few of the overnight snowfall totals, such as "FRESHIES" and "DEEP".  Now, expect me as a PNWet vet to downplay snowfall, expecially given my third winter bumping chairs was an 800" year at Baker.  I've shoveled snow at Crystal through an entire 100", three-day cycle.  Speaking of chiropractors.

Still, if one were to say to the average enthusiast skier, "What amount of overnight snowfall would qualify for you as, say, MEGA?" you'd likely get answers ranging from 20ish up to like 40 inches.  Or more.  I mean, MEGA is much bigger than deep, or dumping, or merely a refresh, right?  MEGA is what you call a night where when you head into the E Lodge after driving up from town--arriving at 2 in the morning cos you're 19 and an idiot like I was--your old '87 GL is noticeably bereft of settled snow, yet when you get up for work four hours later, you can't find it anywhere.  MEGA is where the storm is still talked about even though it happened in the 50s, when most of the folks who were living on the south shoulder of Shasta then and actually witnessed the 189" cycle have long since crossed the rainbow.  MEGA is when Bridger locals stay home on Boxing Day of '03 because it's snowing so hard that Crystal's 24 hour record of 64" in February of '94 is in danger long in the rearview mirror.  MEGA is when a particularly potent föhn cycle sets up over the Alps and Südtirol gets hit with endless snowfall that isn't even measurable because of the immensity of the cycle and its shifting winds.  Or whatever falls at eleven grand on Tahoma during a nice November Pineapple. 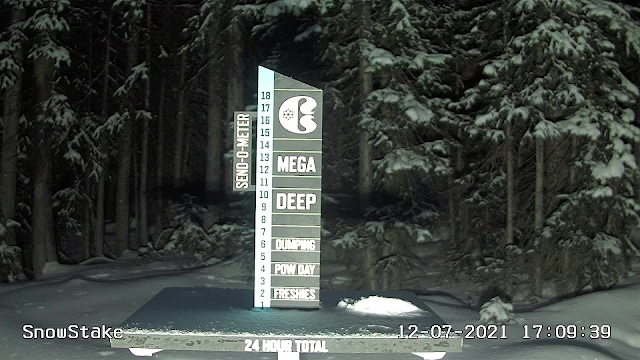 I prefer the term PUKING.

What is not MEGA is 12".  In a good El Niño winter, Wolf Crick and Mammoth folks call that "Tuesday".  A grizzled janitor pushing snow with a broom in Erie, PA calls that a "weak Lake Effect band."  At Baker or Alyeska or anywhere in the Alps of Honshu, you'd call that "Tuesday between brefix and second coffee."

Buried in the middle of this is the word DUMPING.  I know that being correct, especially with regard to language, is unhip on all sides of the aisle in these Insta-addled times, but come on. Dumping is a verb, and a simple one at that.  When describing snowfall, it's very subjective, and utterly non-specific.  It is possible, even common, to be dumping and also not accumulating at all, given the right concoction of atmospherics.  It's also possible to be dumping and land 10" in less than three hours.  Spooky skiing, this.  Mostly though, it is simply a fun description what is going on at a given point in time; "It's dumping right now."  On a derivative chart from position to jerk, it is velocity.  Useful info, but dependent on other things.  Snow can fall for 24 hours--the normal time between snow stake swipes--and never once actually be dumping, yet land exactly 6" new.  It can also be dumping continuously and land much, much more than 6" in 24 hours.  Sometimes, that's called "Oops I just scraped the side of this fancy car whose owner forgot to mark it with boo.  Can I drug test and go home, Ed?  No?!  Okay."

I know this sort of hubris is harmless on its face.  In theory, no one is making decisions based on the words next to the numbers, and anyone who's looking at the numbers already has their own word for what each mean.  Me? I'd leave the snow stake alone, but wipe it every two hours.  Then 12" really would be MEGA. 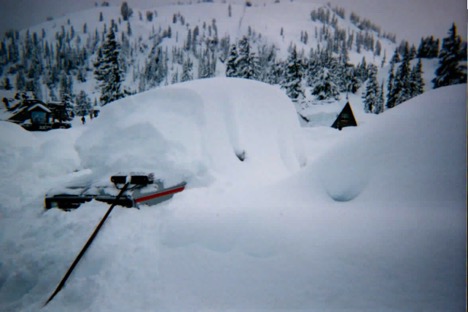