Like many things in the west, Peter Skene Ogden is credited with naming Mt Shasta.  There isn't a lot of concrete evidence he even knew which mountain he was naming.  The mountain most certainly went by names other than Shasta before him, and still does.  It could be Shasta, yes, but it could be Úytaahkoo or Lemuria or the Root Chakra of the World.  Ogden called neighbouring McLaughlin Sastise, and many other names, and the name was transferred in the way of folk music to another mountain, and transposed, so that today we have Shasta, 80 or 90 miles to the south.  McLouglin was known by many names as well.  Such is the way of things when so many of the peoples within viewing distance don't have truly shared language, or aren't in contact with the regularity that is required of community reference.  This sounds like a criticism, and it is much the opposite.  It is a rich pastiche we modern white Americans are sadder for not knowing or understanding.  Unlike Tahoma, Denali, or Koma Kulshan, there really isn't a widely agreed upon ancestral name for Shasta. Cos, you know, stuffy academic white people need to agree on what somebody else's ancestors called something that will be here long after we are gone for that name to hold steady.

Shasta is in the southeast of Siskiyou County, and is utterly dominant.  It is the most voluminous (no more eloquent way to say it) volcano in the Cascade Arc.  To those of us who are tied by birth or spirit or whatever to Tahoma, it is a bit surprising to note.  Tahoma is massive.  Ever present.  Comfortable and threatening all at once.  I grew up not too many feet above the Osceola Plateau, the mudflat spatulaed into place by the historical Emmons Glacier, its foundational rock, and much of the summit of Tahoma when the northeast aspect liquifacted and ran all the way to current-day Puget Sound.  Well, Whulge.  A rare native name these modern ears find inelegant, which obviously doesn't matter.  To me, Tahoma is the sky, and God, and most everything, so to admit that Shasta is actually bigger in mass is an interesting academic challenge.  Shasta doesn't care what I think, though.  Shasta is a beautiful, asymmetric composite cone with a commanding view of the heat of the Shasta Desert east of Yreka.  The Shasta River (sensing a theme yet?) drains the northwestern aspect and some of Mt Eddy and its foothills to the west.  The desert isn't empty, not in the sense of the southwest.  It's a working desert; the forests around are working forests.  It is bounded on the north by the Klamath River and the Monument--the bridge between the Siskiyou Range and the Cascades--and on the east by the Lost Cascades. The desert is hidden to most, hot and uninviting to the unimaginative.  If one is heading toward Shasta from the south as most folks do, from the Central Valley and the Bay, this small desert simply doesn't exist.  It shares a lot of mystery with all the deserts, well and lesser known.  Shasta's bulk shadows the brown fields a bit and gives cover to any ghosts that may glide along in the night. 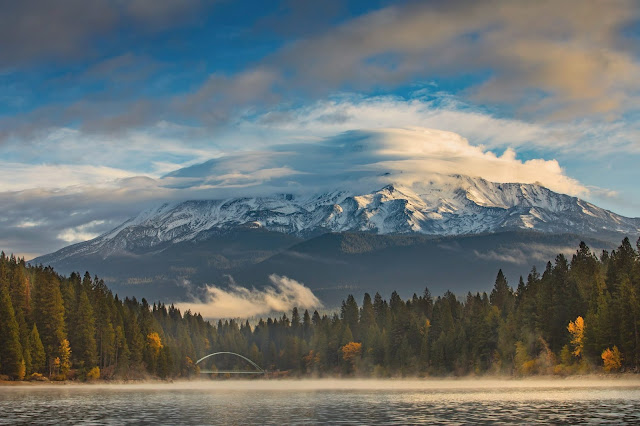 From Lake Siskiyou
Photo by Stephen Leonardi on Unsplash

Shasta, the volcano, is a hallucination from the summit of Diablo, a flag waving in the distance above the Central Valley.  To some, it is home to dolphins and eternal near-humans from some long-lost island in the Indian Ocean and life-defining crystals of some sort.  I've tried to find out more, something specific, but all the literature is delightfully vague.  Shasta City is a central point on the southwestern slope, a place to gather supplies for the long day of climbing Avalanche Gully, a coffee stop in a dirty and welcoming downtown, or a place in the hills to assemble the last needs before shutting oneself off from the cluttered world of modern society in some sort of yoga retreat or, more likely, a montane hallucination of privileged white spirit quest.  Just east of town, lined up to the north off the highway that eventually leads you to the volcanic wonderland surrounding Old Tehama and New Lassen, are four small buttes on the southerly shoulder of the volcano.  Mt Shasta Ski Park sits on the middle two bumps and a mellow ramp immediately west.  It is a small area, three chairs, some snowmaking, some nice Shasta fir (speaking of disorganised etymology) and knobcone pine, and an incredible view of the southern Cascades and eastern Klamath range.

These southern Cascades are many shades different from their northern cousins.  Well known in ski circles are the jumble of volcanism from the Klamath Basin up through Hood River, the accretionary alpine wonder of the North Cascades from Snoqualmie Pass into Canada, or the high country steeps east of Tahoma.  This mildly bizarre slice of far-north California is just, for lack of a better word, different.  It is so dry that the planners of the PCT took it well to the west through the Klamath Range and only brought it back to the actual crest at the natural bridge of Siskiyou Summit.  As one walks northward, one is constantly playing peek-a-boo with the domineering spirit to the right.  In the winter some years, it is almost as dry.  The south slope of the volcano is also home to some of the most intense snowfall anywhere, with a single-storm record of 189 inches in three days back in 1959.  In a wet, cool, southerly upslope, this mass of orography provides limitless forcing and it can just absolutely puke.  If the storms track in from the west, sometimes there's little if any snowfall as the Klamath Range is mighty, wide, and built out of epochs of uplift such that there is no simple drainage system or terrain gap to allow any low-level flow to pass through.  There are several peaks in the neighbourhood of nine grand, with Mt Eddy due west of the volcano across the low valley at a handful of yards above.

The ski area itself is pretty much lost in this place.  It slides down one side of two small and unassuming peaks and attracts working class folks from Weed and Redding.  The curious, interesting, and oddly formed knobcone pine that make up part of the forests are head-scratching to those of us used to more traditionally shaped conifers.  Its cones curl back toward the trunk.  These cones are serotinous, opening only after a fire.  It isn't a particularly charismatic tree, not like its mixed-stand companion.  These fir stand tall, red-barked, cones upright.  The first ride up Douglas our first day skiing at Shasta, we both were surprised by the weedy little Pinus attenuata, not sure what it was or what to make of it, but it grew on me.  Out here in the desert, away from conifer country, I miss it.  No surprises there; to quote John Prine in the liner notes for Iris DeMent's Infamous Angel, I am a sentimental old fool.  Anyway, diversions, diversions.  That's all I am some days.

I have been in retail, fixing and selling bikes to often disinterested folks, for going on twenty years now.  I try to speak only in affirmatives, this bike does trails and some climbing, that one does descents like Hugo Harrison, that one over there is real good at listening, that one with the skinny knobblies will serve up a nice flatiron steak with mushrooms and pine nuts and gruyère on house-made Finnish crisp bread.  Skiing is no different.  I look to find what a place is good at, such as Bogus' weekday quiet and adventurey willow skiing, or Mt A's views and Chute 4 in the Bowl and the Void off the southeast side from the top of Windsor.  Shasta skis real nice in a cold southerly upslope on Christmas when Anderson Grade is closed to anyone without chains or 4, obviously, but it also sure does a nice job on MLK when Mt A is closed due to wind and the snow gets sloppy.  Douglas has a short, fun pitch full of manzanita that bakes into a smooth whipped cream in the low-angle January State of Jefferson sun, off the south side and not skied all that much.  I learned quickly one winter that Amy's college slalom skis with the race plate ripped off may not adequately float in this wonderful stew, but that's me and not Shasta.  Coyote has some moderate steeps, that fun sort of pitch that with courage and good grooming can be railed on edge, or steered with less vim and maybe less on the line.  Some southwest aspects that bump up nicely, some fir thickets that really benefit from a few inches of wind consolidated.  As with oh, so many ski areas in the west, a little ambition can get you some interesting sidecountry that feeds back into the area.  (The usual caveats apply; slackcountry is backcountry, don't go if you don't know, that sorta thing.) 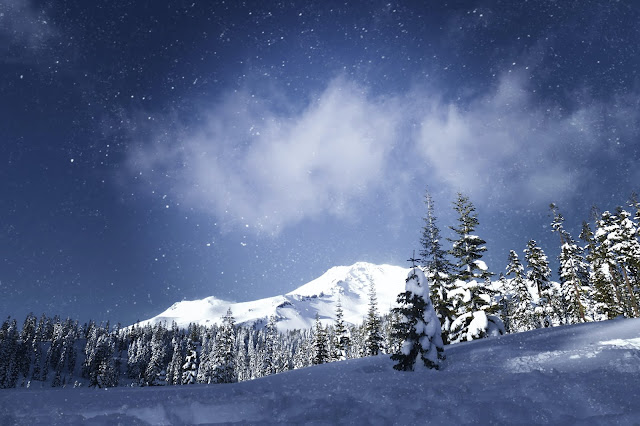 From Bunny Flat, near the old Ski Bowl
Photo by Eleonora Patricola on Unsplash

Something the Ski Park has that many western ski areas do not is a varied and longer-trailed beginner zone.  Marmot is one of only a handful of beginner chairs I can think of with a view of a nice fourteener.  It is slow, and pretty long for a beginner chair.  Shasta is a place where one is best served by patience and proper expectations.  The groomers skiers' right of the chair are wide, mellow, fun to just ride along, slowly rolling the skis edge to edge, wide open train tracks and a couple nice nose dives to the left.  It's certainly possible to ski each named run in just a few days, but I wouldn't.  Relax, make some nice turns, watch the Abies x shastensis and Pinus attenuata wash by, maybe have a La Croix in the lot looking up at the amazing volcanic spirit hanging above.

The post-pandemic eddy of this river of time still hasn't arrived.  Some things won't be around in a year or two; I think my favourite coffee and book shop with the wall of mysticism is gone already. That long drive back to Ashland certainly wouldn't be the same without a short stop for a magazine and a fluffy beverage.  It's very pretty, though, Interstate 5 itself notwithstanding.  Surprisingly quiet, the desert to the right and the hills north of Eddy to the left, Shasta looming in the rearview, Ash Creek Butte hiding over there in a hidden corner almost out of sight.