By Amy Post
My knees have hurt for 20 years.  It started back when I was a freshman in college.  My alarm went off at 5:00 AM, I dragged myself out of bed, ate a banana and called campus security for a ride down to the fitness center so I wouldn’t have to walk there in the dark.  There I met up with the ski team, a small and friendly, but nonetheless intimidating, group of student athletes.  We ran, lifted weights, and did dynamic exercises like box jumps.  At the time I didn’t know what else to do but to go all in.  I pushed myself to keep up, even though I couldn’t keep up.  I ignored the pain, because that’s what you’re supposed to do, right?  No pain, no gain?
A few months later, I couldn’t walk down the stairs without a sharp pain in my knees.  I went to the doctor and they said tendonitis.  Then I went for an MRI and they said chondromalacia patellae.  Twenty years later, I still can’t spell that correctly on the first try.  My knee cap doesn’t track correctly so it shreds up the cartilage on the back of my knee cap and causes pain.  I went to a physical therapist who was really dismissive and said, “Just…” and handed me a standard program.  That wasn’t helpful.

I tried skiing with the team that winter.  I kicked some ass in the few races, but in the end, had to quit before the season was over.  It hurt too much.  One day I was walking by the social justice activists’ meeting in the student union building, saw a friend who called me over, and was thus occupied for the remainder of my college career. 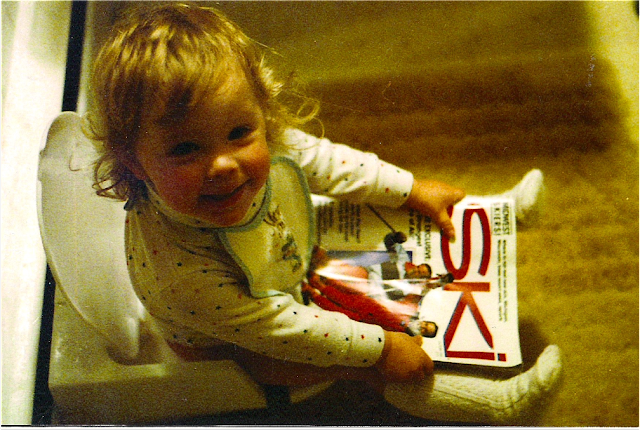 I graduated from college in 2006 and didn’t know what to do with myself.  So, I went to live in a big house in the woods with a bunch of friends.  We lived as cheaply and collectively as possible, grew a garden, raised chickens and a goat, played our own versions of basketball and badminton, hosted community dinners every Sunday night and threw some truly great parties, including a pig roast on the Fourth of July.  Then the economy crashed.  What’s a girl to do with an English degree when the economy goes into a tailspin?  Well, move back in with her parents and fulfill her childhood dream of being a ski bum, of course.

I got a job in the ski school sales office at Bogus Basin.  I skied a ton and coached Mighty Mites on the weekend.  I found a physical therapist who helped me and I started to learn how to listen to my body.  I learned, some pain is good, some pain is fine, and some pain is there to tell you to stop.  Boy howdy, did I think I was a good skier back then.  That first season, I signed up for a PSIA Level I prep clinic.  The first session, I remember saying, “Yeah, I’m pretty much an expert skier.  I just can’t ski moguls.”  Eric, my clinician was patient and taught me that in fact, I did not know how to turn my skis.  Okay, yes, I could turn my skis, but I could not make a turn shape that controlled my speed.  This experience set me on a journey towards better skiing, meeting my partner who also loves to ski, and a career of which my much-wealthier friends are envious.

The following season, I attended a class on pre-season training.  I learned that what I did my freshman year of college was way too much for me.  I learned how to pace myself, which exercises I can do and which exercises I have to avoid, modify or skip altogether.  Now I know I have to work up to the more dynamic stuff very slowly, and that I can’t run if I’m doing anything else that’s high impact.  I put together a pre-season regimen that got me strong enough to ski at an aggressive level.  Most importantly, over the course of a couple years, I learned how to manage my knee pain so that I could ski my brains out.

Unlike the ski team workouts in college, I just didn’t do the things that hurt too much.  Over the course of eight to twelve weeks, I worked up to jumping lunges, one-legged squats and box jumps.  I started with one set of the easiest version of each exercise, two, then three times per week, and never got beyond an 18-inch box jump.  I worked out alone because I had to move at my own pace; if I was trying to keep up with someone else, I would over-do it.  I ignored anyone who wanted to push me harder, because I knew my limits and knew that I was pushing myself as hard as I could go.  This approach worked really well for about ten years.

Then my boss sexually harassed me for a year.  His abuse, the consequential legal fight, move to another state, and starting over at a new job with a lot of baggage deteriorated my mental and physical health.  All this stress made my knees hurt a lot more.  Anxiety decreases your pain threshold, and pain increases anxiety.  Isn’t that unfair?  Four years ago, I meet my medical deductible (thanks, Obama!), so I went to get another MRI.  In the almost 20 years between MRIs, I’d worn all the cartilage off of my knee caps.

Then I blew up my knee at a PSIA event.  As a skiing professional, I knew that at some point I would likely tear my ACL.  It’s something many ski pros go through, and I knew many people who have recovered from this injury.  But, when I crashed, in addition to tearing my ACL, I broke just about everything else in my right knee.  I had one major surgery to repair the broken stuff, and another to remove some metal that had detached from my bone and was floating around, running into my IT band.  During the first surgery, I had the surgeon to work on my knee cap problems, since he was going in there anyway.  This is a big story that will be told in a separate post.

I have a great physical therapist that I started working with before I blew up my knee.  He’s a skier and he really gets me.  He’s also  very creative and knows how to challenge me in order to keep me engaged in my rehab.  For a while after each surgery, I made great progress.  I expected to continue making that progress until I regained all the strength and ability, I had pre-accident.  I expected results and I wanted them immediately.  I was going to be back on snow at the beginning of the season, god willing and the creek don’t rise.

When I progressed to exercises that loaded my kneecap, I ran into a wall.  Loading the knee cap means directing pressure into it.  You do this when you step down off a stair, squat, or ski: anything that puts your body weight into that small bone and its surrounding soft tissues.  My knee cap, already cranky from years of wearing off the cartilage, is incredibly sensitive and I have not been able to work past this sensitivity.  Because my knee cap can’t handle load, I can’t increase my quad strength, and my quads can’t get stronger because I can’t load my knee cap.  I can’t flex my knee, under load, beyond about 60 degrees because the pain physically stops me from doing this movement.  I can’t push through this pain.  My body just says, nope!

Sometimes I get impatient and push through the pain anyway, compensating with my other muscles and just gritting my teeth.  Then my knee flares up and takes anywhere from a few days to a few months to recover.  It’s so easy to over-do it and sometimes my knee flares up because it’s Tuesday or I had teriyaki for lunch or my sister sneezed in Madison.  I’ve been running up against this wall over and over for the last two and a half years and it’s maddening.  I was trying to force my knee to heal and was furious with my knee for not cooperating.  I did the exercises.  I was on a first-name basis with everyone in my physical therapist's office.  I put in the work, so why can’t I get the results I want?

The other day, my mental health therapist said to me, “Most people wouldn’t have put up with that pain.  They would’ve quit.”  This made me laugh because it had truly never occurred to me.  Quitting never crossed my mind.  I keep comparing myself to other skier who have recovered from their major injuries.  It never occurred to me that I don’t really encounter the ones who do quit, because they’re no longer around.  She also asked me if I regretted wearing all the cartilage off my knee cap.  This made me laugh too.  Hell no, I don’t regret it.  I’ve had a lot of fun doing that much damage.

I went to see a new orthopedic specialist last week.  The good news he gave me was that I’m not a good candidate for more surgery.  The frustrating news is, I have to start over with rehab.  I need to rebuild my base strength before I can even think about ski-specific training.  Isometric quad contractions, hold for 10 second to one minute, repeat ten times.  Simple leg lifts four different ways, three set of ten, add weight when they get easy.  Go slow and do them every day.  It takes me about 45 minutes to do them all, properly without rushing.  The first two to six weeks of physical therapy are mind-numbingly boring. 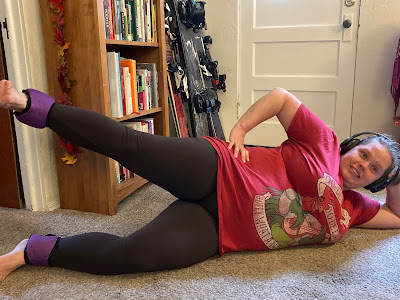 I’ve been doing these slow, tedious exercises for five days now, and I know the new doc is right, because I’m already in less pain.  I’m going to stay the course, but I just don’t know what will happen when I get to the kneecap-loading exercises, or where I’ll be at the start of the season.  If I’ve learned anything from the rehab I’ve done since my big accident, it’s that I can’t put a timeline on my recovery.  I have to be patient.  If I get impatient and push through the pain, I’ll hurt myself and end up back where I started, or worse.  I don’t really have a target for recovery.  I’ve let go of the idea of “fully cleared,” or getting back to my previous level of strength.  I want to get there, but the reality is, I may not ever get there.  I may never again be the skier I was, and I’ve accepted that.

That’s not to say that I’m giving up.  I don’t know where my rehab will take me, or where my skiing career will go from here.  No short cuts this time, and I can’t expect immediate results.  I have to trust the process and be kind to myself.  My knees talk to me and I have to listen with compassion.  I want to keep skiing, but I don’t want to damage myself further by doing it.  I’m not sure the pain is worth it any more.  I’m going to have to work really hard to just be able to slide around on the slopes.  So, I will put in the work and see where it takes me.