Castles in the Sand

Test mountains: Bogus Basin, ID; Timberline, OR; The Place That Shall Not Be Named, UT; Anthony Lakes, OR.

Oh? You thought this was a new ski? Sorry.  Well. Not really sorry at all.  I haven't skied the new one.

By the stamp on the sidewall, this ski was pressed in Vorarlberg at the Head factory.  Two sheets of metal.  It drilled nicely, if you're curious.  I don't remember pulling any screws like I would have on an old Soul 7.  My copy may originally have been a demo at Montage in Deer Valley.  I know this, because when the dude who curates the Lost and Found Collection at The Place That Shall Not be Named rolled through the repair shop in the fall of '015 with his pile o' random $#!@ for the big crunchy bin with these skis somehow in that pile, they had a) demo bindings and b) a fading sticker from Montage in Deer Valley.  To keep the peace with the Authorities at the place that shall not be named, even though the skis were literally headed to the giant garbage disposal in the sky maintenance shop, I paid $50 and gave the demo bindings to the rental shop in case they were needed.

Now, before we get into the meat (the metal and wood) of the ski, let's discuss them graphix.  I mean, they are the elephant in the gondola, so to speak.  I mean, they are flat-out ugly.  Not ugly-cute like a baby condor.  Just ugly.  I am one who speaks in favour of orange from dawn until dusk, and probly in my sleep.  I am fine with white.  Together, the two are fine.  Creamsicle, all that.  Something happened, though.  Not sure what it was.  Maybe somebody in the bowels of whatever Austrian design firm Chris and Hugo badgered into designing said topsheets (all of the original models were similar) was like "F^#%in North Americans.  They don't know what beauty is."  Or maybe somebody actually wanted a ski that resembles a spatula (not that Spatula).  At any rate, my Svenska flag deck'-ul (Ask a Canadian.  That's how you say it, eh?) is a little off-kilter and even though there's a good chance my dueling Scandihoovian decals are why my friend Stina and I are, um, friends, they still don't make a dent in the overall scheme. 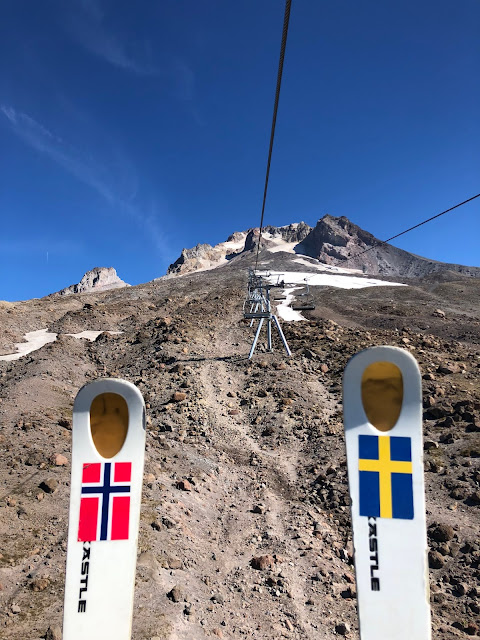 Given all this vitriol heretofore vomited on this keyboard vis-a-vis the distasteful nature of the MX88's visual appeal, I gotta say it just doesn't matter.  If someone handed me this exact ski with some other graphic, and not even one as bad as K2's death clown bullshit from whenever that was, just some pleasing scene or colour scheme, and also the actual ski, I'd choose the actual ski.  The ski doesn't scream out for attention.  It's like a ti hardtail in that if you know, you know, and otherwise it's just a ski that one weird guy with the flannel and race poles is always on and it's forgotten.  I think the Svenska have some fancy word for this; most Nordic folk (I'm pretty sure we're Sámi but people don't know or care what that means) don't want to be noticed unless it's by someone who knows why we should be noticed, and then a tip of the cap will suffice.  A "nice turns" at the bottom of the Exit Chutes.  (Thanks Ingrid!!)  Which, by the way, they were.  Well, they felt nice.  I trust someone who's won multiple World Freeride titles, but I hedge when it comes to describing myself.  I always repeat the line my Pa heard in Garmisch when he was stationed there after his tour in Vietnam.  I can turn both ways and stop.

This may sound like the sort of rhetorical stretch a high school junior would make when comparing himself to, say, a character in Virginia Woolf, and for that I again do not apologise.  This ski gets me, man.  Like, really.  Coupled with the criminally boring graphical topsheet that after 8 or 9 seasons is peeling off the metal structural topsheet, the power and ease with which it glides along is impressive.  I have made more good turns on this ski than any other, likely more than all other alpine setups combined.  Given its striking similarity to my previous benchmark, the orange Monster 88 that was even pressed in the same factory, I expected a similar ride.  It is not.  It is better.  Best.

I have found in my 39 seasons that a cheater GS radius is about perfect.  There's enough sidecut for when you really need to lay 'em over, and enough stability for finding speed before bending them in half.  This goes especially for this old MX88. I don't believe in one-ski quivers, and this couldn't be one.  It doesn't float.  I do enjoy skiing the wrong ski, and at this, we find shining excellence.  Well, dull, faded white and now-brownish orange excellence.  There is a hardness beyond which this ski is simultaneously under-edged and over-girthed, but if there's something to snack on, and it isn't a 12" bowl of recently sifted powdered sugar, I have not found a peer.

I won't prognosticate on whether some tip rocker would deaden this ski like it was an Enforcer by another name, but it might.  This ski came to me well on in its life, and it has held up far more than the $50 price tag would suggest.  I will not be replacing it with something new; instead I will ski it until the 900S either pulls screws and runs or finally stops grabbing boot.  With the latter, I'll probly just add the one drilling needed to slap the purple 997 atop and keep on given 'er.