Life is waiting for you.

Mt Herman is quite a bit bigger than the two little lumps Mt Baker Ski Area settles on.  It's also in the Mt Baker Wilderness, and pretty darn intimidating.  I only skied it once while I was bumping chairs at Baker, my second winter.  My roommate Brian--he said his college buddies back in Boone called him Twig--and I took Avy 1 and this was our class' final. Plan a route, hike or skin, and ski.  The snow wasn't really all that good, as the only safe route that week was the south aspect.  The sun had been kind and settled the previous week's snowfall.  Minimal wind, and while the turns weren't awesome, the whole trip was worth the sweat.

Another day, Twig and I headed up the Blueberry Cat Track toward Austin Pass.  It was a dark night, no moon, without any cloud cover to reflect any human light back toward us.  We skinned up with head lamps to the backcountry gate that opened out toward Table.  Neither of us was super adventurous that night except in heading out alone after dark with only a few real BC days between us.  It had been cold and dry all day and most of the previous, so the storm snow had settled and was starting to chalk up nicely.  Just through the gate into the Wilderness, we tried making turns with the headlamps. We found that it was just like driving in a snowglobe down 542 with the high beams on, that disco ball/under-sheet effect.  After some hesitant and very blind turns, we put the lamps in the packs and finished the remaining however many hundred vertical to Upper Bagley and headed back to the E Lodge.  The light from the windows doesn't project very far out into the world  That building seems permanent, impenetrable on the inside, but from out and away it looks like a tarpaper shack in a world full of ghost and wolverine.  As the legend goes, correctly, to be certain, there isn't a good deal of time to stargaze there, buried and surrounded as one is with approaching 700 inches on the average every winter.  The myth of the never-ending winter, or the reality of February 99 where it snowed, sometimes for days without end, more than an entire Vermont winter.  That night was cold, quiet, mystical.  I think Brian and I were maybe winding each other up a bit with our imaginations.  Mine, at least, runs a little wild and maybe left of centre (thanks, Suzanne).  Spirits, ghosts, squirrels, sabre tooths, that sorta deal.  Night rides at Point D in Tacoma I'd see wolves in the Thuja and rhododendron if there was a full moon.  Better, then, to ride in the perpetual mists. 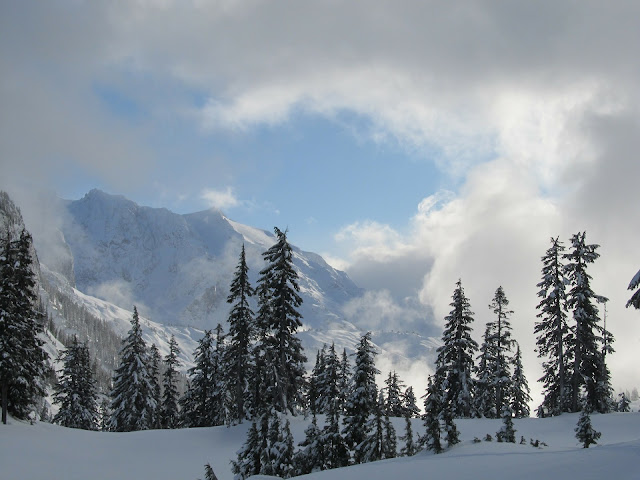 The skiing that night wasn't what the magazines show of Baker.  It was archetypal PNW chalk, a few inches carveable above a winter's settled cement.  I get a little bit het up when people toss off the Cascade Concrete epithet without knowing what it actually feels like deep in a late March cycle, but it is there for the simple reason that once settled, the snowpack is incredibly solid.  Given a normal cool spring and early summer, Solstice turns on a still-fat snowpack are the norm in a good portion of the Range.  When it's early February, Steenburgh winter, that solid layer cake is wonderfully supportive.  With each turn, you shave off a nice slice and spray it to the wind.

Baker is a small place, in the scheme of modern skiing.  Those Euro resorts that span many drainages and untold peaks, or inter-connected Utah, or sprawled and unfortunate Vail, all dwarf the grand and a half of vert and the thousand acres of inbounds squeezed indelicately between North Cascades NP and the Wilderness, vividly represented by Shuksan, the Orca, to the East, and Kulshan, the Patriarch, to the west.  The common narrative is come for the first run on Gabl's or Sticky, stay for the deep, uncontrolled BC.  One could spend a lifetime hiking the Arm and Hemispheres and Table and never suffer for choice, but for two winters I barely scratched the surface.  That seemingly diminutive grand of vert can and does bury you.  Baker takes effort, takes stubborn anger sometimes, to hold on.  It isn't surprising when someone washes out, moves on to places more friendly.  It isn't surprising that the general vibe of the joint is best if one stays in the shadows, hides from view, or skis only when everyone else is kick-turning out the Arm.  I am biased in all things, I admit; by and large Baker, the ski area, is an unwelcoming place.  The mountains themselves, that huge and Krummholz drainage, that beautiful river, they are all a security blanket typical of the Cascades.  The folks who pose and preen and expect that you respect some imagined hierarchy are nothing of the sort.  Angry, hip, demanding.  If one actually finds a spot in the region, a spot in line, say, one has to fight to keep it.  Howat's mossback stubbornness might be dangerous and demeaning, but it's to be expected.  The fight to hold one's territory feels primal, like neighbouring tribes of chimps.  My brother and I didn't get along with Howat and some of his team, and it's been nineteen years and more since either of us was welcome.

The afternoon shift at the top of 5 was my favourite.  The light on Shuksan and Sefrit and Ruth, the spires guarding the international border, smaller peaks like Goat and Tomyhoi, the air when the sun was low. Larrabee.  Whatcom County, the Lower Mainland, this wild patch of ancient accretion and tumult and modern vulcanism.  An entire eastern state's worth of water all in a handful of admittedly huge creek draws, steadily, contradictorily eroding and sustaining.  Down, most days in a rush and a roar, to the Salish Sea.  Tumbling, echoing, tearing, gliding.  The smash-and-ram afternoon calving off the the Hanging Glacier, the first morning crepuscular rays promising good viz and good snow, only to be something else entirely.  Snow in heaps, or rain in sheets, or wind that doesn't stop.  Rain to the top of 8 and then snow to town.  My last day of EMT, December of '01, I left Tacoma after my state written test and put my foot down, trying to make it before the forecasted storm really settled in.  I'd skied at Crystal the day before, some real nice early season stuff out North, and then a vintage PNW warm front slid on through.  There was lightning in Mt Vernon on the Skagit, and by the DOT, the road was white.  Buried well below Bagley Creek.  The cold front had blown through quickly, some heavy pre-frontal mank set down quickly and well above freezing, followed by some legendary post-frontal moisture at quickly lowering snow levels.  By the time I hit White Salmon in that little GL wagon, I was pinned.  4 Low, no stopping or slowing.  I think the speedometre was showing 35 or 40 and I was barely moving.  30 or 40 minutes up the three miles to the E Lodge, shaking and wound up.  I'd fallen into the fully buried ruts of whichever other kid had punched his or her way up the last bit of the highway, hoping they'd made it all the way up since their ruts were quite adamantly steering me.  Not much sleep, then up at 5 to get ahead of the rest of the lodge for breakfast.  32 new.  That's thirty, and also two.  I've been places where the two is exciting.  Rain at the top of 8 at closing, and 32 new at 6 in the morning.  The post-frontal crapshoot included more unstable temps, so maybe that bounty wasn't reminiscent of that trademarked fluff Steamboat names after a certain bubbly vintage from the northeast of Le Français.  Maybe it was challenging, deep, and tiring.  Maybe Denny was surprised to see me, maybe he didn't schedule me.  Maybe I hadn't needed to fight through some of the worst driving I've ever done, but then I wouldn't have this one picture of one turn on Sticky where three weeks after first flakes it looked like it'd been snowing since '81, charismatic Tsuga and Pseudotsuga bending low under the heavy snowfall, pitch dropping away until the run was over and I realised I didn't have it that day, at least not dropping the knee.  Too early in the year, too little sleep, too much roiling about in my bloodstream.  Those two years passed like that run, and maybe Denny telling me we needed to see other ski areas was like the realisation at the bottom of 6, that I'd be better to move on.  Being right doesn't always matter, and sometimes one isn't anyway right in the first place.  Maybe there's an upper limit to how deep is deep enough.  Maybe one is better off in the desert, believing that magical place is still there, than living in that magical place, realising not only that it isn't magical but that it's just as damaged as anywhere else.  That one is better to move off and find one's own place in the world rather than fight for a small piece of something over which other folks will kill. 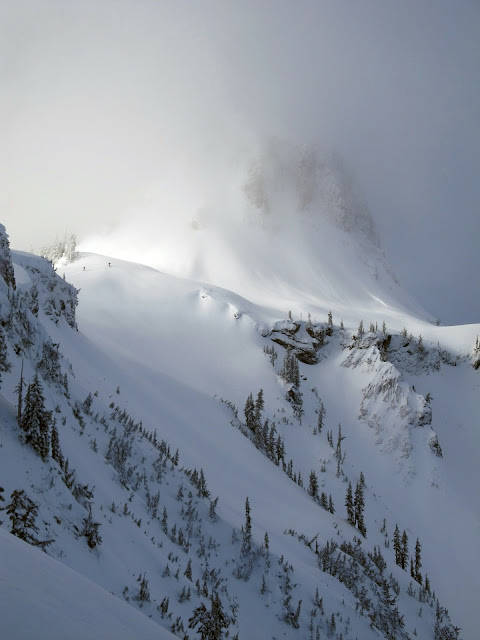 Table Mountain from somewhere around the backcountry gate.

Title from Our Lady Peace' "Life"