Shane McConkey is credited with introducing and normalising rocker in the ski world.  I'm not educated enough to know if skis of old from, say, the Altai Mountains, had any, or if the original Telemarkers of Norge shaped their skis like a water ski, so maybe he was the first.  He certainly did more than anyone else to introduce it to the masses.  Then it became "technology", and pretty soon even some World Cup level race boards had to have an early rise tip.

There's that now-iconic segment in Matchstick's Focused where Shane skis a huge steep face on waterskis.  You'll have to pardon the terrible music, but it's a simple explanation of how we got here from whence we came.  I remember right when the Spatula came out, riding Rex with the late Tom Maks.  I was (still am, to some extent) an interested reader of the various ski lit out there, so I knew the story of and reasoning behind the Spatula he had on his feet.  I asked him what he thought so far, and he said, sans irony, that they were pretty much useless in-area.  Even at a joint like Crystal where there are big, open, steep pitches that often have some fairly deep snow, one still needs to get back to the lift.  That was the disagreement that most ski writers and testers had with the Spatula, that they were so limited.  One couldn't even tour on them because of the reverse sidecut.  They required a deft hand, and by all accounts, access to the kind of terrain the general public doesn't readily have. 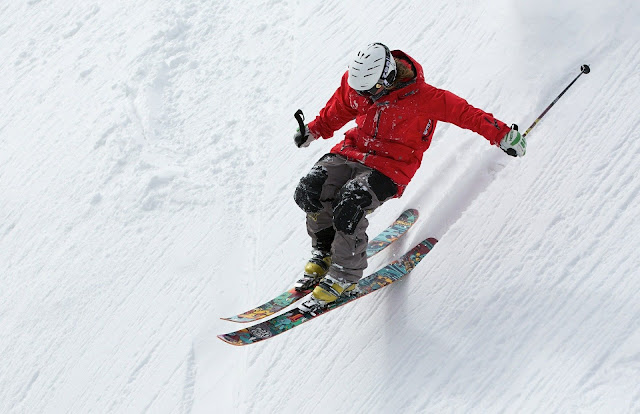 With rocker, you can do whatever it is this guy is doing.

Whether it was because of Shane, or that he simply pointed things out that already existed, though, the idea didn't die.  With rocker or early rise or or reverse camber or whatever we choose to name it, people found certain things were easier.  Floating, schmearing, slarving, getting out onto pitches or into conditions one otherwise didn't have the skills to actually handle, all of a sudden became more accessible. Marketing folks happily played on the general public's ability to conflate and inevitably confuse the ability a strong skier who skis five or six days a week has with the tools that incredibly skilled and practised skier employs.  Plake, for the longest time, argued that since he and his ilk and those before him didn't need them fat skis or rocker or pronounced sidecut, no one did.  Everyone ignored him, and for a time sort, of looked askance.  Especially those with bucks to be made in selling this new technology that was neither new nor technology.

In around '05 or '06, things started to get real weird.  John C Davies, then of Powder Magazine, called it Donkey Ball Rocker.  Or someone else did and he publicly proclaimed he was against it.  At any rate, the sidelong glance nature of the epithet was a shake of the head about the absurdity with which the industry had embraced the whole reverse camber ideal.  The industry has since settled in and found ways to shape skis that take advantage of what Shane brought to the fore.

It's been credited to all sorta folks, currently to George RR Martin through his martyr Eddard Stark, that everything that comes before the "but" is horseshit. So, with that in mind, here goes. . .

Shane was such a character, so influential, that it seems dang near blasphemy to take issue with something, anything, he did, but I do.  In skis over 100mm, maybe there is a place for rocker, but even then it isn't wholly necessary.  I've skied some skis where the biggest year-to-year change is adding tip rocker, and found the new ski lacking the liveliness and pop that old ski had, but did not feel any benefits in return.  Before y'all get all angry and say things like "it's easier" or "it floats better", please remember that the ski is a tool, and it's up to the skier to use it.  Easier isn't better or worse, it's just easier.  The original Völkl Katana floated just fine, thank you, and it did not have rocker, nor did the Nordica Girish from a year or two later that was incredibly similar in radius, construction, and girth.  Both were pretty much just big, mildly detuned GS boards.  26, 27 metres, mild camber, stiff without being unyielding.  Man, do they still do the job, 10, 11, 12 years on.  They respond to technique, and to power, and best to a skilled combination of both.  They are, unquestionably, expert skis designed for experts.  Backing away from this goal is something manufacturers in the ski world have been guilty of over and over.  One need only remember the second Atomic Big Daddy.  Some companies have found ways to market different types of skis for different purposes, but there is still the whiff of "intermediate" in skis that are easier to ski, and that is a major problem.  If you want a specific set of traits, say, a lighter touch in edge release, or slightly more intuitive float in the deep, go for a ski designed that way.  The Blizzard Rustler series is intentionally easy to handle, and it has a comfortable place in resorts with complex off-piste.  It isn't marketed as anything other than what it is.  It seems that so much of the industry can't get past genre and thinks that an expert ski still needs to be approachable by the banker or the dentist for their trip out west and that just ruins everything and I hate it.  An expert ski is for experts who put time and energy and their lives into skiing.  That banker or dentist isn't that skier.  That banker who skis 2 weeks at Deer Valley on the family vacation with the ski instructor as a guide will benefit from a friendly ski with some light tip rocker, a 90 mm waist, some early taper, and a friendly, lighter flex.  I, someone who has benefitted greatly from being willing to live at or near the poverty line, scrounge skis from swaps and the second hand store and demo sales, who has put everything into skiing, will benefit greatly from a ski actually designed to be skied.  Driven, steered, bent, shaped by the skier.  I want an edge that goes all the way.  I want camber, tip to tail.  I want rebound, metal, and a binding that doesn't melt all its plastic if I ski in August at Timberline.

My buddy Gus is always haggling me that I shouldn't get all het up about tech that I find useless that still, somehow, has a market, like carbon gravel bikes or donkey ball rocker or, like, tuna casserole.  In the capitalist sense, he's right.  I really don't care, though.  I am not a capitalist.  I don't mind if I sound whiny.  I hate that there are so few skis out there that will actually do what I want.  My current benchmark for skis is the somewhat old version of the Kästle MX88.  I don't know what year it came out, because I bought it for $50 from the going-to-the-dump pile at The Place That Shall Not be Named.  It is one of those skis that is damp while still transmitting info, active without feeling jumpy, stable without feeling dead.  That skilled broker of deals, that compromiser who ends up benefiting and not actually compromising anything.  It doesn't ski the deep very well, but it's not a big ski and doesn't need to.  What it does is pretty much everything else, well, in pretty much any condition.  I do not ask it to hold an edge on the periodic Beast Coast ice we get here in Southern Idaho, and I think it thanks me for the leeway.  It responds with aplomb when tasked with a practicable do it.  Why I bring this ski up is that my version is fully cambered and fully edged.  I just measured with my highly scientific hold-it-in-my-fingers method, so there.  I know things.  I had the displeasure of skiing a newer version, and though once I finally got the tip to the snow, it did hold, any sort of mid-angle turn just felt dead.

This is definitely sour grapes from a middle-aged white guy.  I have been left behind by my chosen industries, mostly because I don't buy in to much of anything.  Whatever ski it is that gives you the fizz, by all means ski it.  Smile and turn, laugh if it feels right.  If you get a chance, find a shop that demos one a them fancy new Blizzard Firebird skis, the one with all that metal and all that ridiculous and energetic camber, the one that doesn't wait for you to catch up.  Like a deep day, though, get up there early.  There's nothing like the satisfaction of knowing the tracks under the chair at which the other folks are pointing are yours.