I wanna tell you about my hometown.

It useta be a dusty ol' jewel.  No longer.

One of my oldest ski memories is skating around from the top of 1 to the bottom of 2.  And before you accuse me of false sentimentality, keep in mind that that configuration was really poorly planned.  It wasn't a good profile, this junction, and Crystal skied better once they pulled old 2 down and built Rex.  It pains me to admit, lover of Riblets that I am.  Years later, 2's motor room was the grip room for Lift Maintenance.  When Kenny and I were doing all 87 grips, we set up instead in the back of Rex's shack and sprayed orange degreaser over the wall at Vinny near the end of each pay period when his cash money ran out due to his copious marijuana consumption and he couldn't afford his insulin. When he got tired of it, he asked that we spray TriFlow cos he liked banana better than orange.  Anyway, steep Riblets over good moguls, I miss em.

One of my most vivid ski memories is of a day in 8th grade, '95, where I skied Rex all day except for one run in Powder Bowl.  It was the last or one of the last years of Club Vertical, an ill-fated run tracking system that also served as the season's pass and employee ID.  Deal was, you wore this little colour-coded wrist watch bobbin over your glove and tapped two pins that connected some pre-RFID magnet thing with a gate, or with the time-clock, and some sorta magic happened.  It was sometimes problematic.  Especially if you and your ski partner in crime, Aram, tried to jump on at Quarterway at speed and the gate didn't open and you bent the gate with all of your 145 pounds of schußfahrt acumen.  Anyway, that one day in '95, the system was working and I decided I'd see how many laps I could get.  I remember 53, but according to my maths and Peter's incredible lift database, that'd in the best of times take 7 hours and 15 minutes, not including a likely 20 minute detour up 9 and 6 to get Powder Bowl.  It doesn't really matter, though, cos memory.  Memory trumps reality.  I skied flat out from 8.30 bell to 3.30 bell, beautiful Cascade chalk spray and sunburn and if my memory of 54 total runs is even close to correct, I overtopped 80 grand of vert in one day.  I've had days where I was satisfied with the 500 on loan on the easterly aspect of Yakima, like fully, happily satisfied, as if I had a cutting board full of smoked fish, cheese, light crackers, pickled vejies, and a big glass a Newcastle at the Black Sheep in Ashland during a foggy December inversion kinda satisfied.  80,000 is just an absurd number, even if the actual number was closer to 70,000. 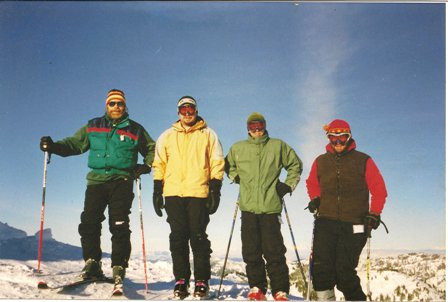 Another day, this one after getting kicked out of Pep Band (as I write this I have to stop and admit just how privileged I sound and how fortunate I am) for, natch, skiing.  Now, it's important to note that the reason Judy kicked me out is I was the drummer, technically the only one, and I skipped a District Tournament basketball game to ski with my Pa.  Okay, maybe not important.  Even if it had mattered in the end, which it didn't cos with the exception of the few games left in the season, I didn't miss anything, I would do it again cos both skiing and more importantly, skiing with my Pa, of which days if there were a handful of millions, there wouldn't be enough. At any rate, I left school when I could (my ego says it was when the Pep Band left for the tourney, but Judy was vindictive enough to both give me an A- freshman year to ruin a 4.0 and to also tell my teachers that I no longer needed the afternoon off) and snagged a ride with JO and his sister-in-law Jen up to the hill and tried to get a goggle tan while night skiing.  You laugh at the prospect, but I did.  Goggle tan, I mean.  The day before with Pa had been typical PNW thick cloud cover, chilly, puking, deep.  That night skiing Chair 4 from Quarterway I pretty much tucked, run after run, until what I think was the 10 o'clock last bell.  I think I wore JO's found-in-the-lot homemade puffy vest.  I can't remember what skis.  Salomon 83 boot.  Orange and black.  Rear entry, cos '97. You know.

Crystal is situated at the upper end of Silver Creek, in what used to be a picturesque amphitheatre of Pinus albicaulis, Abies (Abieses?) lasiocarpa, amabilis, and procera, Tsuga mertensis, Pseudotsuga. I'm sure there are others.   Corvus corax, Tamiasciurus douglasii, what have you.  Chipmunks and mormota.  Some martens, I'm certain, cos they rad.  What is now another corporate playground for "'knowledge' workers" from wherever.  The same sad refrain of CB and Stowe and Sugarloaf and Solitude and Tahoe locals.  A place that once was, did not move, changed little in appearance, yet disappeared just the same.  There are a few camps of loyalty at Crystal; the Founders, actual Greenwater locals, Boyne apologists, and more than a few folks who see opportunity in a giant, useless, exploitive corporation such as the new owners, Alterra.  Nothing against Rusty Gregory personally as I've never met him, but I have a suspicion Crystal skied better in '85.  Things devolve, although usually not all the way.  The same trees, same little rivulets that gather, the descendants of the same ravens plying the thermals.  The snow, when it comes, and the rain.  There are a few new lines that weren't there fifteen years ago from some huge control work results.  There are more people venturing out past Boxcar as well.

That night, sophomore year, one of the runs in full tuck I hit some kinda rut in the snow, and it damn near took my right leg off.  Sent a jolt plumb through to my shoulders.  I kept skiing, but for the last few runs I pulled back on the throttle.  I've never had good night vision.  I still remember the colour of the night skiing lights through my goggles, and how unhelpful it was at speed.  I don't know what I was tryna outrun that night.

Stina lost her Karhu (RIP) tele board, not sure whether left or right, in one of the chutes below the Beach.  I think of it as Stina's Chute, though it isn't all that far from where Pa's ACL and MCL gave up and snapped in mid-January '000.  He always skied a little in the back seat.  Still does, thankfully.  Ski, anyway, not the backseat part.  That's also the last slot I can remember skiing at Crystal.  It's been since Liisa's wedding in '014.  Things always conspire.  I struggle with the distance as it is, this 500, 550 mile drive from the desert.  I can't imagine what some of the folks feel who had to leave Gällivare or Narvik or Oulu when the fisheries fell or the Russians came calling or when their kin moved south to build trucks for Volvo and they didn't want to be in the city.  Mabye nostalgia is a disease, like they claimed back in the middle ages.  Farming was never easy, nor mining, nor logging, but there never really was opportunity here, either.  Only continued indentured servitude.  At any rate, this drainage, with its little draws and big snow, calls like the old country it is.

Someone hiking out South found Stina's ski the summer after she lost it, and Pa's knee knitted up in large part due to Chris Cancro's stitches and to some good physical therapy.  Amy and I moved to Ashland, then Ogden, then BoyCee.  The itinerant blood I was born with isn't as thick as it may have been with some of my ancestors.  I'm tired.  There are times I wanna adversely possess a Thuja stump above the White and live there, and times where I'm already done moving.  That chute, and many others like it, keeps me up at night.  O Meadows, or that little slot toward skiers' left of Niagaras where I ganked my back up but permanently this time, or the Toaster, Rabbit Ears, Kemper's Only When It's Foggy and Patrol and Uwe's Successor Can't See You, the Cache Run, Flush Gap, Rock Face (even though I've totally never poached that ever, not even it was milkbird and nobody could see me if I did ski that entrance higher up than Banana Chute quickly and without hanging around to revel in it, which I totally didn't), or just about damn near anywhere in the Upper Silver Creek drainage.  It's home, more than even the town I grew up in, 40 miles downstream.

From the top of East Peak, all of Crystal's permit area, not just the controlled and patrolled, lays out before you, along with a lot of more, um, spicy terrain.  Tahoma gazes over the shoulder of the drainage.  The Summit House is silhouetted against the milky sky by the oncoming trough, the exposed ridgeline cluttered now by the less storybookish Uni-G terminal of the not exactly necessary gondola.  Pa cut that liftline, so there's that.  The Cascade Range is huge, from a disputed (large, visible and related volcanism or giant, incredibly important river valley?) point north of the international border to a vague and wandering line of complex orogeny somewhere around Lake Almanor inside the current enormous Dixie Fire.  This isn't a spot where the curvature of the Earth is the horizon.  The hills and conifer and peaks and Corvis all hide something further on.  From the summit of Bachelor one can see three states and at least two massive geologic provinces.  From here, the divide between Whulge and the immense Columbia, one sees peaks that seem far off but are twenty, thirty, forty miles as FarFar Johan flies.  Sometimes it's hard to stop spinning.